The coronavirus outbreak has underscored the prominent role that science news and information can play in public life, and there are signs that Americans are now paying more attention to science news.   More than half of U.S. adults (56%) say they talk about science news with others at least […]

The coronavirus outbreak has underscored the prominent role that science news and information can play in public life, and there are signs that Americans are now paying more attention to science news.

Americans’ engagement with science news in everyday discussion is higher than in a 2017 Center survey, when 44% said they talked about science news with others at least a few times a month.

Pew Research Center conducted this study to understand Americans’ engagement with science news. The analysis is based on a Center survey of 14,497 U.S. adults conducted from Nov. 30-Dec. 12, 2021.

Everyone who took part in the survey is a member of the Center’s American Trends Panel (ATP), an online survey panel that is recruited through national, random sampling of residential addresses. This way, nearly all U.S. adults have a chance of selection. The survey is weighted to be representative of the U.S. adult population by gender, race, ethnicity, partisan affiliation, education and other categories. Read more about the ATP’s methodology.

Here are the questions used for this analysis, along with responses, and its methodology.

The survey that this post is based on is made possible by The Pew Charitable Trusts, which received support from the Chan Zuckerberg Initiative.

Science can bring to mind a range of topics for people, including health and medicine, artificial intelligence, and space exploration. In the 2021 survey, there is some variation in how often Americans talk about and follow accounts on specific science-related topics, including health and medicine, the coronavirus outbreak, and energy and the environment. (Read the topline for more details.)

Interest in following science news is up modestly from 2017, with the share of adults who are at least somewhat interested 4 percentage points higher than it was then.

Education is one of the biggest factors behind interest in and engagement with science news and information.

Around four-in-ten postgraduates (41%) and 35% of college graduates say they are very interested in following science news, compared with 26% of those with some college experience and 19% of those with a high school diploma or less education.

Interest in science news also tends to be higher among men than women, as well as among those with higher than lower family incomes.

At a moment when debates over science-related issues are often polarized along partisan lines, a large share of Americans express frustration about the amount of partisanship surrounding science news.

About three-quarters (76%) of Americans say, when following science news, they’ve felt frustrated that there is so much political disagreement in this area. Notably, this sense of frustration is shared by identical shares of Republicans and Democrats (78% each). A separate Center survey this year found partisan disagreement is also among the top factors Americans believe has contributed to problems the country faced dealing with the coronavirus outbreak.

Still, 57% of Americans express some level of confusion when it comes to science news, reporting that they feel it is difficult to know what to think due to so much conflicting information. And half of Americans feel they should be keeping up with new scientific developments more than they currently do; roughly as many (48%) say they don’t feel this way.

College graduates and Democrats are more likely to report positive reactions to science news. Three-quarters of those with a college degree or more education say they have felt amazed by new developments, and 73% say they have found it reassuring to see that scientific knowledge is always being updated. By contrast, about half of those with some college or less education report either of these reactions. Democrats, meanwhile, are 20 percentage points more likely than Republicans to report feeling amazed by scientific developments (68% vs. 48%) and 24 points more likely to feel reassured that scientific knowledge is always being updated (70% vs. 46%).

Among those with higher and lower levels of education, similar shares say it can be difficult to know what to think because there is so much conflicting information in science news. But Republicans are much more likely than Democrats (70% vs. 47%) to say they have had this reaction when following science news.

Partisan affiliation is connected with views of the reliability of journalists and experts for science information.

Note: Here are the questions used for this analysis, along with responses, and its methodology.

Emily Saks  is a research assistant focusing on science and society research at Pew Research Center.

Alec Tyson  is an associate director of research at Pew Research Center.
Next Post

‘I’ve drunk from every river on Dartmoor’: land artist Richard Long on changing the face of art | Art and design

Tue Nov 15 , 2022
Richard Long never carries water with him when he walks. The legendary British land artist, who famously turned walking into an art form, has tramped for days, sometimes weeks, through terrains as barren as the South African Karoo desert, India’s tribal lands and the Hoggar mountains of southern Algeria without […] 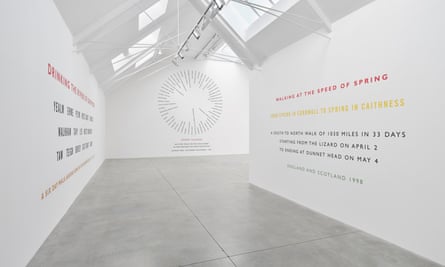