Start spreading the news: Viewers want to be a part of “East New York.” But audiences won’t come aboard “The Real Love Boat,” which last week became the first broadcast casualty of the fall season. That’s the topsy-turvy fall at CBS, which can boast both the most-watched new shows and […]

Start spreading the news: Viewers want to be a part of “East New York.” But audiences won’t come aboard “The Real Love Boat,” which last week became the first broadcast casualty of the fall season.

That’s the topsy-turvy fall at CBS, which can boast both the most-watched new shows and the first cancellation. The Eye network’s cop drama “East New York” has been booked as the top-rated freshman series among adults 18-49, according to early Nielsen returns. Of course, it leads with a 0.6 rating, a minuscule number that illustrates the cold, hard truth about primetime viewership in the streaming age.

But the Eye network missed with unscripted dating competition “The Real Love Boat,” which has been shipped to Paramount+.

The show was part of a Wednesday-night lineup of reality hours, sandwiched between stalwarts “Survivor” and “The Amazing Race.” The newcomer couldn’t keep up with those two, averaging below 2 million viewers in recent weeks. Although remaining episodes will be burned off on the streaming service, it’s unlikely the series will return after that. (An Australian version of “The Real Love Boat,” on CBS’ Paramount Global sister network Channel 10, has also struggled.)

On the bright side at CBS, the network has picked up additional episodes of “Fire Country,” “East New York” and “So Help Me Todd” to round out full-season orders. At the other networks, NBC’s “Quantum Leap,” averaging 3.9 million viewers, also has had its first season extended, as has ABC’s “The Rookie: Feds,” with 2.9 million viewers.

Surprisingly, the fall broadcast report card might be considered a win for original IP. The CBS trio of “East New York,” “Fire Country” and “So Help Me Todd” are all based on homegrown ideas, as is ABC’s “Alaska Daily,” which is off to a solid start. They’re ahead, at least so far, of more familiar titles like “Quantum Leap” and “The Rookie: Feds.” (And of course, awareness of the classic “The Love Boat” failed to translate into viewers for the unscripted edition.)

But all this is prologue to say: In broadcast, it’s still all about the NFL. Bolstered by “Sunday Night Football,” NBC has overall fall bragging rights so far, leading the primetime pack with a 1.2 rating in the adults 18-49 demo and 6.5 million total viewers. “Sunday Night Football” and its pre-shows give NBC three of the most-viewed programs and four of the highest rated this season.

In adults 18-49 ratings, the top three entertainment shows, with sports and news removed, are all unscripted. ABC’s “The Bachelorette” takes first place with a 1.1 average; “Survivor” and the Sunday time slot for “Big Brother” are tied for second at a 1.0 rating. Next, all with a 0.9, are NBC’s “Chicago Fire,” “Chicago P.D.” and “Law & Order: Special Victims Unit” as well as Fox’s “9-1-1” and “The Simpsons.”

The titan of the fall is once again Dick Wolf. Between the “One Chicago” (NBC), “FBI” (CBS) and “Law & Order” (NBC) franchises, he’s created four of the top 10 shows, and seven of the top 20, across both total viewership and the key ad demo.

Fri Nov 4 , 2022
Adam Sandler, Hubie Halloween Scott Yamano/Netflix Since the Netflix top 10 shows and movies lists reflects what people watched yesterday, today’s lists give us an idea of what everyone watched on Netflix Halloween night while they were hiding from trick-or-treaters. That would explain the triumphant return of Adam Sandler’s Hubie Halloween […] 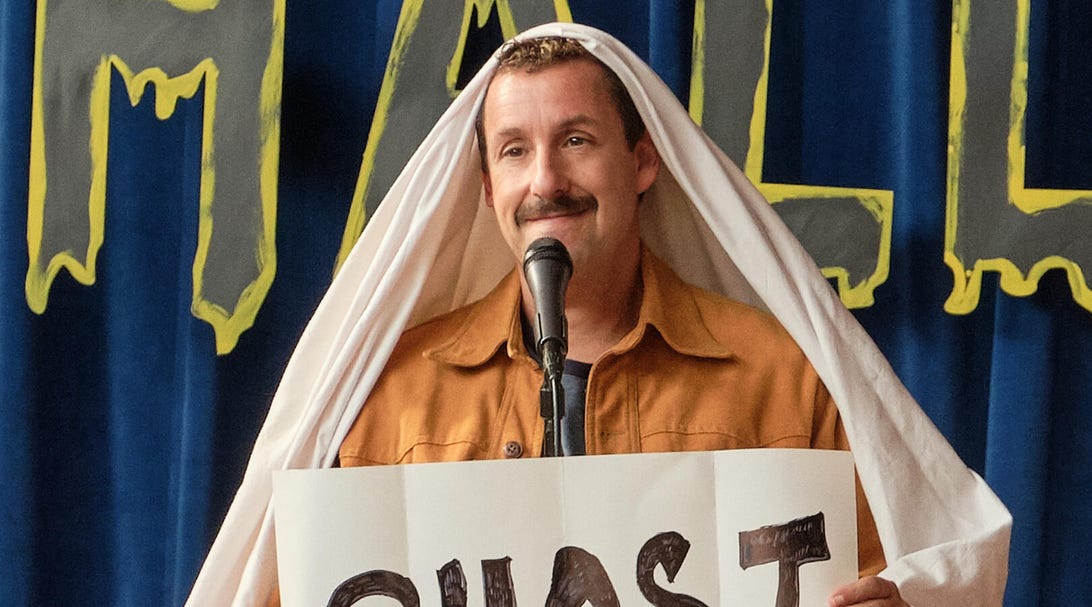