Editor’s note: Morning Money is a free version of POLITICO Pro Financial Services morning newsletter, which is delivered to our subscribers each morning at 5:15 a.m. The POLITICO Pro platform combines the news you need with tools you can use to take action on the day’s biggest stories. Act on the news […]

Editor’s note: Morning Money is a free version of POLITICO Pro Financial Services morning newsletter, which is delivered to our subscribers each morning at 5:15 a.m. The POLITICO Pro platform combines the news you need with tools you can use to take action on the day’s biggest stories. Act on the news with POLITICO Pro.

It’s been a pretty good week for Joe Biden.

The president’s party may yet lose control of the House and Senate next year, but White House officials were thrilled that Democrats didn’t suffer bigger losses on Tuesday. Instead of a bloodbath, it was the best midterm election for a party in power in nearly a century.

And it got even better Thursday morning, when the Labor Department said inflation cooled significantly last month.

The consumer price index, which measures what Americans pay for everything from laundry detergent to lawnmowers, rose 7.7 percent in October from a year earlier — down from an 8.2 percent increase the previous month, and less than the 7.9 percent that economists expected. Core prices, excluding food and energy, similarly eased.

Stocks jumped on the news and Treasury yields fell amid hopes that the improving inflation picture will mean a quicker end to Fed rate increases. For now, the report keeps the Fed on track for a half-percentage-point rate hike next month.

The highlights: The report showed that services inflation, excluding shelter costs, is decelerating, after a “disturbingly upward climb” over the past couple of months, Singh said.

But the deceleration is partly due to a change in the methodology for estimating health insurance prices, which makes the big decline for the month a bit misleading, said Ryan Sweet, chief U.S. economist for Oxford Economics. Still, there was good news beyond that — growth in food prices moderated, and some other supply-constrained sectors fell, including used car and truck prices.

Food and energy prices remain a wildcard risk, Singh said. “Much depends here on the outcome of the game of chicken between the G7 and Russia on the looming oil price cap … as well as the flow of grain from Odessa, both of which are factors entirely outside the Fed’s control,” he said.

There’s more data to come, including a report on the Fed’s preferred inflation gauge at the end of the month, a jobs report in early December and another report on consumer prices before the Fed’s Dec. 13-14 meeting.

There’s a long way to go before inflation is back to normal levels, and there may be bumps along the way, Biden acknowledged in a statement Thursday, adding that officials will “keep at it” — echoing the title of former Fed Chair Paul Volcker’s 2018 autobiography.

But he also took a moment to boast about the icing on an already sweet week: “Today’s report shows that we are making progress on bringing inflation down, without giving up all of the progress we have made on economic growth and job creation.”

FTX? MORE LIKE WTF — Our Sam Sutton: “FTX CEO and founder Sam Bankman-Fried on Thursday said he was caught unaware by how poorly positioned the crypto exchange’s balance was amid market volatility, as he scrambled to save the company and deal with regulators.

Regulators across the globe are circling Bankman-Fried and FTX to determine whether it may have harmed clients or broken other financial regulations.

SEC Chair Gary Gensler said on CNBC: “This is a very interconnected world in crypto with a few concentrated players at the middle.” He added that lack of disclosure, a misuse of customer funds and high leverage can create “toxic combinations.”

“This is a field that’s significantly non-compliant,” Gensler added. The best way to protect customers forward includes “working with those crypto exchanges, crypto lending platforms, and to get them properly registered” with the SEC.

COINBASE REACTS — Even after FTX’s downfall, Coinbase CFO Alesia Haas tells MM that her exchange doesn’t see an immediate path forward to register as a securities exchange with the SEC.

“There’s rhetoric about: ‘firms need to register, firms need to register,’ — but it is not possible,” she said. “We have sought out every license that we possibly can in the jurisdictions in which we conduct business. So we have the [New York] BitLicence. We have money transmission licenses. We have licenses now with the CFTC. There’s not yet a clear path with the SEC. We are actively engaging in dialogue to make that a reality.”

Coinbase formally petitioned the SEC to engage in rulemaking that would allow them to list digitally native securities earlier this year. The SEC alleged in court filings earlier this year that at least nine of the tokens that have traded on the platform are investment securities – though it did not accuse Coinbase of wrongdoing.

— WSJ reports that FTX “lent billions of dollars worth of customer assets to fund risky bets by its affiliated trading firm, Alameda Research, setting the stage for the exchange’s implosion.”

— Reuters reports that Bankman-Fried is trying to pull together a $9.4 billion rescue financing package from other crypto businesses and Wall Street investors

— FTX and its affiliates have resigned from a pair of Washington industry groups, the Crypto Council for Innovation and the Association for Digital Asset Markets.

— Its U.S. affiliate announced that it “may” shut down trading in the coming days – appearing to undermine Bankman-Fried’s earlier claims that the U.S.-based exchange was “not financially impacted by this shitshow.”

— Bloomberg’s Annie Massa: FTX US employees are trying to sell off the company’s holdings without Bankman-Fried’s input, “including stock-clearing platform Embed and naming rights to an arena in Miami.”

BOOZMAN: MY CRYPTO BILL NEEDS ANOTHER LOOK — From Sam: “The Senate Agriculture Committee’s top Republican, Sen. John Boozman of Arkansas, is calling for a “top-down” look at his crypto regulation bill following the sudden collapse of the global digital asset exchange FTX.”

MORE PAIN INCOMING — Bloomberg’s Joanna Ossinger: “Crypto markets face weeks of deleveraging in the fallout from the crisis at digital-asset exchange FTX.com, a period of upheaval that could push Bitcoin down to $13,000, according to JPMorgan Chase & Co. strategists.”

TAXES — Our Bjarke Smith-Meyer: “The taxman is coming for crypto. The European Commission will soon begin talks with the bloc’s treasuries on whether a single EU tax regime is warranted for the cryptocurrency market.”

TREASURY MARKET REVAMP — Our Victoria Guida: “The Treasury is leading a group of federal agencies in weighing whether to restructure the U.S. government debt market to shrink the role of megabanks as part of an effort to ensure that trading functions more smoothly in times of stress.”

CURRENCY REPORT — Our Steven Overly: “The Treasury Department declined to brand any U.S. trading partners a currency manipulator in a foreign exchange report published Thursday, though the agency again singled out Switzerland for practices that could give it an unfair trade advantage.

TWITTER CHAOS — Our Rebecca Kern and Alfred Ng: “Elon Musk’s Twitter came under sudden and unusual fire from the Federal Trade Commission on Thursday, after a chaotic 24 hours in which new subscription rules triggered a raft of fake ‘verified’ accounts, and key privacy and security executives quit.”

— NYT’s Kate Conger, Ryan Mac and Mike Isaac: “Mr. Musk warned employees that Twitter did not have the necessary cash to survive, said seven people familiar with the meeting who spoke on the condition of anonymity.”

MEANWHILE, IN EUROPE — Bloomberg’s Zoe Schneeweiss: “The European Central Bank must take clear steps to bring down record-high inflation, Bundesbank President Joachim Nagel said. ‘We must act decisively,’ Nagel said in a speech in Ettlingen, Germany, on Thursday, adding that he sees the prospect of more interest-rate hikes.”

UPS AND DOWNS — WSJ’s Austen Hufford details what went up (rent, alcohol and restaurant costs) and what went down (beef, electronics) in Thursday’s CPI report.

ADIOS, TECH TALENT WARS — NYT’s Erin Griffith: “Hiring the best, the brightest and the highest number of employees was a badge of honor at tech companies. Not anymore as layoffs surge.”

Mon Nov 14 , 2022
Illustration: Kyle Platts We asked celebrities, Vulture staffers, and assorted other bedtime entertainment enthusiasts, “What do you watch, stream, or listen to as you drift off to sleep?” Here, their answers. “His voice makes me feel like everything is going to be okay.” —Bokeem Woodbine, actor, The Inspection “I usually […] 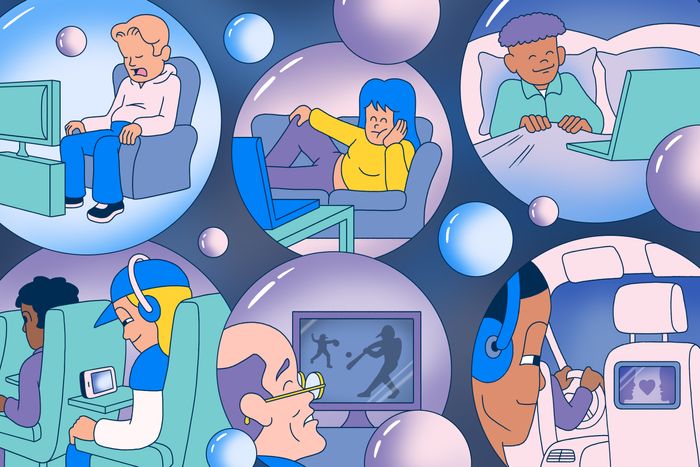