Going out: Cinema Glass Onion: A Knives Out MysteryOut now & Netflix on 23 DecemberDaniel Craig serves up another bucket of his best Kentucky Fried accent work as Benoit Blanc, the deep south’s answer to Sherlock Holmes, capitalising on the rapturous response to Knives Out with essentially more of the […]

Glass Onion: A Knives Out Mystery
Out now & Netflix on 23 December
Daniel Craig serves up another bucket of his best Kentucky Fried accent work as Benoit Blanc, the deep south’s answer to Sherlock Holmes, capitalising on the rapturous response to Knives Out with essentially more of the same, only this time the mystery is taking place on an idiotic tech bro’s private island.

Matilda
Out now
A toe-tapping version of one of Roald Dahl’s most beloved children’s stories hits cinemas and is worth the price of admission for Emma Thompson’s fearsome Miss Trunchbull alone, but there’s also pair of brief but spectacular turns to savour from Stephen Graham and Andrea Riseborough as the vulgar Wormwood parents.

Bones and All
Out now
From Call Me By Your Name director Luca Guadagnino comes another tale of dreamy teen romance, only this time with a fun twist: the central couple are cannibals. Timothée Chalamet and Taylor Russell play the people-eating pair who we oddly find ourselves rooting for, as they munch their way across the midwest AmericanUnited States in the 1980s.

What Do We See When We Look at the Sky?
Out now
We are all familiar with the Hollywood romcom device of a chance encounter between strangers leading to more, but this magical German-Georgian drama takes that gambit to unexpected places, when the star-crossed lovers in question wake up impossibly transformed, and therefore unable to meet for their planned date. Catherine Bray

Blackpink
The O2, London, 30 November & 1 December
The world’s biggest girl band crash-land in London for two arena shows in support of their No 1 album, Born Pink. Packed with nods to hip-hop, pop and R&B, their sleek, chant-heavy K-pop anthems look set to properly come to life assisted by lasers and smoke machines in the cavernous surroundings of the O2. Michael Cragg

Paul Lewis plays Schubert
Turner Sims Concert Hall, Southampton, 29 November; touring to 7 Mar
In four programmes, which he is touring into next year across two seasons, Paul Lewis is presenting a survey of Schubert’s piano sonatas. Early, middle-period and late works are included in each recital, so Lewis begins with the E-flat major Sonata D568, following it with the Sonata in A minor D784 and the great D major Sonata D850. Andrew Clements

David Altmejd
White Cube Mason’s Yard, London, to 14 January
Surreal hybrid creatures, including hares crossed with humans, by a sculptor of the uncanny. Altmejd is fascinated by the face – and its destruction. An Altmejd bust will often have its skin peeled back to reveal a horror within or float enigmatically without a body. Arcimboldo meets Bacon in objects of unease.

Frida Kahlo
Reel Store, Coventry, to 29 January
Not an old-fashioned exhibition of her art but an “immersive” experience that takes you through the life of the Mexican painter. What a story. Kahlo’s intensely illustrated diaries are used to give a first-hand multimedia account of her revolutionary politics, turbulent marriage, physical challenges and triumph as a modern icon.

Wildlife Photographer of the Year
Natural History Museum, London, until 1to 2 July
Even as we destroy nature we obsessively record its beauty, as humans have since the ice age. The latest images of animals taken by enthusiasts of all ages fill this popular annual exhibition, including Britta Jaschinski’s bones of animals killed by mining, and Clay Bolt’s bee by the Golden Gate.

Ken Kiff
Carl Freedman Gallery, Margate, untilto 5 February
A fresh look at this figurative painter who died in 2001. Kiff’s art is joyously sensual and exuberantly dreamlike. He depicts lovers in a dappled paradise of wistful colours. There are echoes of Gustave Moreau and Odilon Redon in these unabashed feasts for the eye that express a personal vision. Jonathan Jones

Nativity!
Birmingham Rep, to 7 January
This popular musical has been adapted by Debbie Isitt, creator of the original film, and is set in a school during the run-up to Christmas – and a particularly nutty nativity. Miriam Gillinson

Peter Kay
Manchester AO Arena, 2 December; touring to 11 August
The king of observational comedy returns, 11 years after wrapping up the most successful standup tour of all time. Can his new material compete with those iconic, headily British early-00s routines? Either way, Kay’s ability to transform mundanity into unfettered joy is a gift never to be sniffed at. Rachel Aroesti

Baghdaddy
Royal Court theatre, London, to 17 December
Jasmine Naziha Jones’s debut play is about a girl with Iraqi heritage growing up in Britain, against the backdrop of the Gulf war. It is directed by Milli Bhatia, who did such brilliant work on Seven Methods of Killing Kylie Jenner. MG

We Are Not Alone
28 November, 9pm, UKTV Play & Dave
Joe Thomas and Vicki Pepperdine are alien conquerors reckoning with human inadequacy in a one-off comedy from the writers of hit sitcom Ghosts. The premise may be an excuse for ridiculous silly face paint and some route-one sight gags, but the cast – which also includes Ellie White, Rob Delaney and Amanda Abbington – promises quality laughs, too.

The Patient
30 November, Disney+
Rare is the buzzy modern drama with no existing hook, but The Patient – neither a book adaptation, a reboot nor a rehash of real events – proves a novel idea and some cracking chemistry is all you really need. Steve Carell stars as a therapist kidnapped by his homicidal patient (Domhnall Gleeson) in an intimate, brilliantly acted two-hander.

Willow
30 November, Disney+
Thirty-four years on, Warwick Davies reprises his role as the titular sorcerer in this TV series sequel to the Ron Howard’s family-friendly fantasy adventure, based on a story by George Lucas. It weaves together original characters (Joanne Whalley’s Sorsha, Brownie pair Rool and Franjean) with a slew of fresh faces to please nostalgists and new converts alike.

Simon Schama’s History of Now
27 November, 9.15pm, iPlayer & BBC Two
From his birth – in London during the blitz – to the global upheaval accompanying his eighth decade, Simon Schama has certainly lived in interesting times. This new three-parter sees him survey the history of his lifetime, with special focus on the cultural giants who have shaped it, from Boris Pasternak to Nina Simone to Ai Weiwei. RA

Warhammer 40,000: Darktide
Out 30 November, PC, Xbox
A fantasy sci-fi shooter in which four players try to stop hordes of enemies from overwhelming a city, using guns, chainsaws and other eye-catchingly physical weapons.

Ship of Fools
Out now, all platforms
This interesting-looking multiplayer has you and a friend (or three) manning a ship as you battle sea monsters, weathering storms and running frantically between cannons. Keza Macdonald

Stormzy – This Is What I Mean
Out now
Created during a music camp on Osea Island in Essex, the third album from rapper, singer and all-round gamechanger Stormzy (above) finds him in a mellower mood. Digging into his more spiritual side, the singles Hide & Seek and Firebabe lower the tempo, with the latter featuring soulful vocals from newcomer and labelmate Debbie.

Caitlin Rose – Cazimi
Out now
Nine years after the release of her acclaimed third album, The Stand-In, Nashville’s alt-country troubadour Caitlin Rose returns. Nearing completion in early 2020, before lockdown changed everything, Cazimi has the feel of a record loaded with emotional purging, especially on the swaggering single, Nobody’s Sweetheart.

2manydjs – As Heard on Radio Soulwax Pt 2
Out now
To celebrate its 20th anniversary, the pioneering remix and mashup opus by Belgian brothers David and Stephen Dewaele has been reissued and will also make its debut on streaming services. Featuring the Stooges rubbing shoulders with Salt-N-Pepa, and Dolly Parton getting down with Röyksopp, it’s a welcome reminder of early 00s excess. MC

Sold a Story
Podcast
This fascinating series examines the “whole language theory” of teaching reading to children, which has had its efficacy disproved yet continues to be promoted in schools. Emily Hanford investigates a publisher that has made millions promoting the idea.

The Infinite Conversation
Online
An AI-generated endless conversation between the film-maker Werner Herzog and philosopher Slavoj Žižek feels like a headache-inducing proposition, but this experiment from coder Giacomo Miceli is actually an ingenious meditation on the possibilities of digital deep-faking. Ammar Kalia

Sun Nov 27 , 2022
Some of the best TV deals you can get now Getty Images/iStockphoto If you’re looking for a TV deal this year, there are plenty to be found: “This is a unique year in that many retailers are sitting on excess inventory of TVs due to pandemic-related supply chain issues,” smart […] 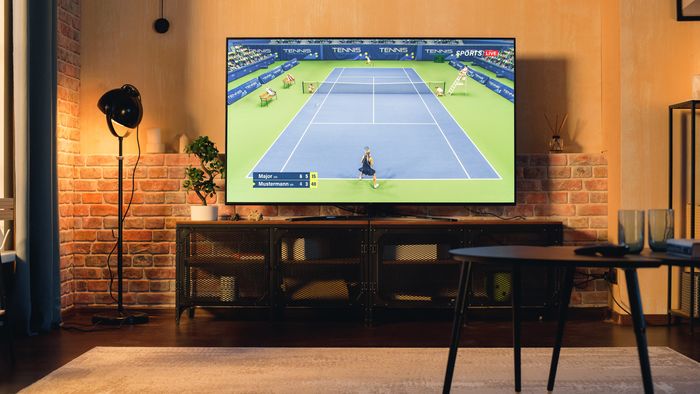