GIFs are no longer just cheesy ’90s internet animations that look about as professional as Word Art and PowerPoint animations. As moving photographs become a mainstream form of expression, the media has evolved into fine art. The latest example of this? The Lightograph. Celebrity and portrait photographer Jeremy Cowart‘s patent-pending […]

GIFs are no longer just cheesy ’90s internet animations that look about as professional as Word Art and PowerPoint animations. As moving photographs become a mainstream form of expression, the media has evolved into fine art. The latest example of this? The Lightograph. Celebrity and portrait photographer Jeremy Cowart‘s patent-pending Lightograph animates a still photograph with moving light.

Similar to a Cinemagraph, a Lightograph is a moving photograph. But, unlike a Cinemagraph, the subject doesn’t move. Instead, the light does. This format allows photographers to capture the same subject—and the exact same pose—using multiple lighting patterns. Besides the position of the light, the light modifiers, including gels, can also change. Cowart, who has a patent pending on the concept, has shot several Lightographs where the light, not the subject, moves inside of an animated piece of digital art work.

Cowart says the format allows a single graphic to tell more than one story. “It forever changes what’s possible in portraiture,” Cowart wrote in a Facebook post. “After all, humans are multidimensional. We are heroes, but we are also villains. We love, and we lose. We grieve, and we hope. We may stall, but we are never idle. Our breath and blood wave through our bodies like the ocean. For the first time, this incredibly complex symphony of the human experience can be reflected back to us in photographic form, composed with light and captured in a Lightograph.”

[Read: Jeremy Cowart on the Global Power of Photography]

The lighting in an image plays a major role in the mood of an image. By changing that light, the Lightograph can encompass shifting moods in a single file. While the first Lightographs are portraits, Cowart notes that the format can be used for anything with a stationary subject, including commercial work.

[Read: 6 Photographers Share How They Have Evolved Their Portrait Lighting]

Cowart plans to auction the first ever Lightograph in NFT format on Thursday, July 15, at Foundation. But, he’s also sharing the technique with other photographers in a paid tutorial that’s currently listed for $250 for one-year access on Vimeo.

In addition to his work as a photographer, Cowart, who is based in Tennessee, is also an entrepreneur and author. Named “The Most Influential Photographer on the Internet” by Huffington Post in 2014, Cowart regularly experiments with not just what’s in the photograph, but how the photograph is taken. During the pandemic, for example, he “teleported” people into his studio using video chat and projectors.

Cowart says his Lightograph evolved from years of experimenting with light, including creating something similar in 2014, a few years after the invention of the cinemagraph. He finds shooting just one background with one light to be boring and his curiosity drives him to innovate and constantly look for the next technique.

“I thought I’d give some background of this process,” he writes in a recent Instagram post. “First of all, I made the first Lightograph in 2014. It wasn’t perfect so I didn’t continue the entire process. But I used most of it for clients ever since. Just years and years of experimentation and tweaking. The reason I love having a studio is that you can sleep on ideas. What if I added this? What if that light moved? What if I add projection? What can the new Canon R5 add to the mix? It’s been endless ideas stacked on ideas for a very long time.

“…the NFT boom made me start wondering how I could add motion to my portraits,” he continued on. “I quickly realized I was already there. The process that I first started in 2014 and have done ever since just made sense for a NFT. So then I started to call the world’s biggest brands, camera manufacturers, lighting manufacturers and industry publications. My question for them was ‘has this ever been done before?’ The answer was a resounding no across the board.” [Editor’s note: Since that post, Cowart has followed up on IG with anther post, acknowledging that after his announcement about his Lightograph, he has found 3 other artists who have tried similar approaches with the same end results: Nick Nacca, Dyan Jong and Alexis Cuarezma.]

More Lightograph samples, as well as information about upcoming NFTs, are available at lightograph.com. Photographers can learn the process behind the format with Cowart’s video tutorial.

Android TV is swiping some of Google TV’s best features

Fri Jul 23 , 2021
Android TV is swiping some of the best content discovery tools from the Google TV platform, including a watchlist and more finely tuned recommendations. Beginning this week, Android TV users will be able to add titles to a watchlist that will populate as a row in the Discover tab. To […] 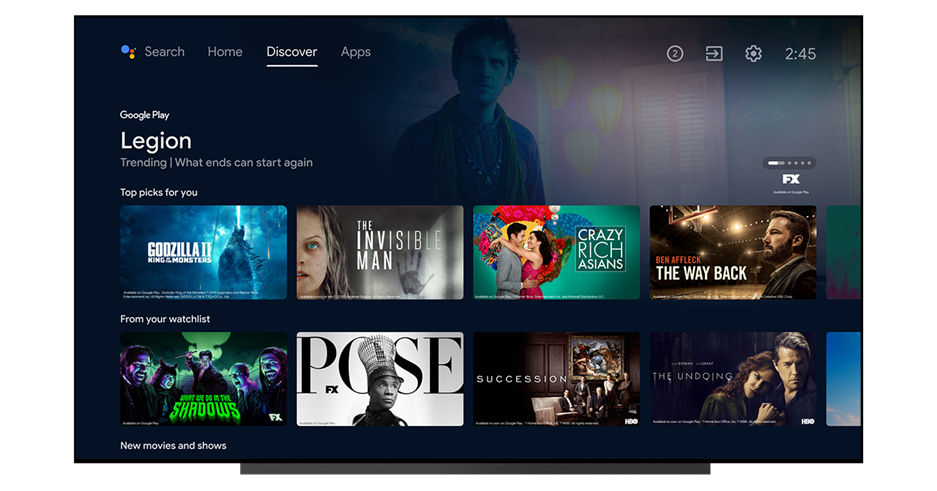