A solitary winter icon, Yellowstone National Park / Rebecca Latson Happy New Year! Did you travel to any units of the National Park System in 2022? Did you get plenty of photos and if so, which ones are your favorites? I know you have favorites, because every photographer has favorite […] 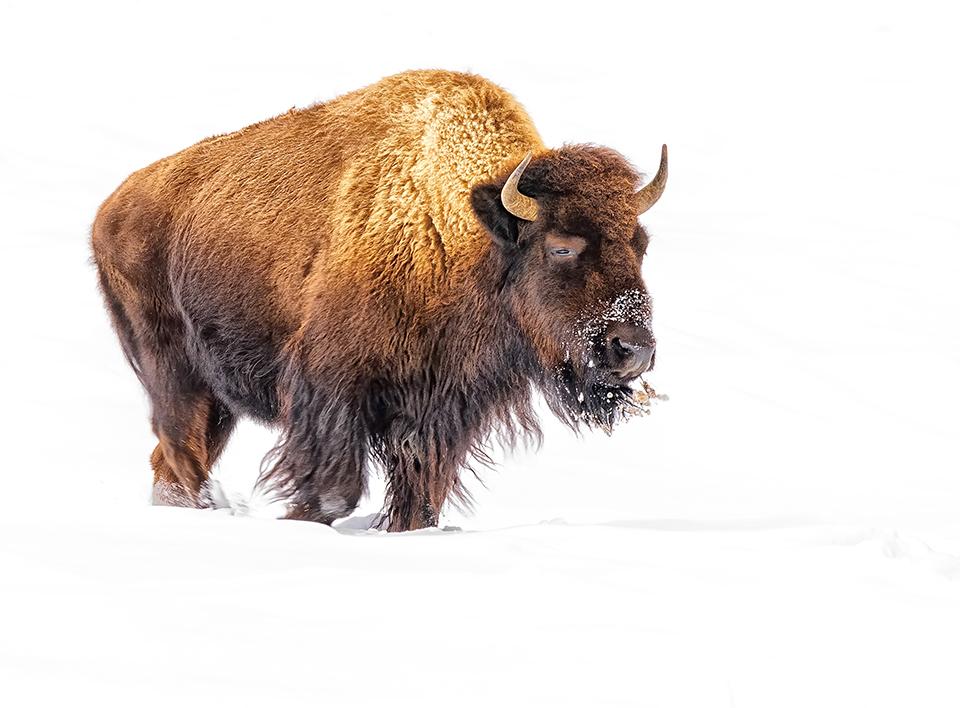 Happy New Year! Did you travel to any units of the National Park System in 2022? Did you get plenty of photos and if so, which ones are your favorites? I know you have favorites, because every photographer has favorite images from shots captured during the course of a year. I certainly do, and in a Traveler tradition begun in 2015, I want to show you my 10 fave photos from 2022. I’ll explain why each is a favorite and how I got the shot.

I love photographing bison, and during my February trip to Yellowstone I encountered (at a distance) several bison herds, including a herd at Upper Geyser Basin not far from Old Faithful. For this image, I singled out one bison slowly trudging through the snow as the freezing wind teased its thick, wooly coat. I distinctly remember my own hands and fingers growing stiff from the cold because gloves were too cumbersome to work with the camera controls and tripod. For this shot, I used my 200-600mm lens on a tripod, then cropped the resulting image for a closer look. 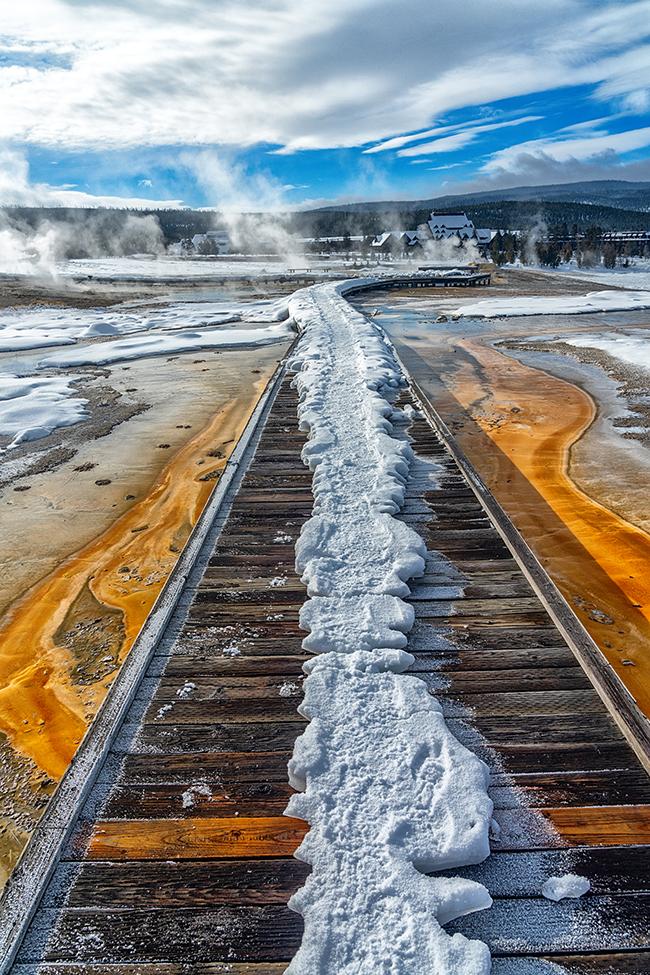 What’s not to like about leading line shots? They are definitely my favorite photographic theme. I captured this colorful scene as a vertical shot emphasizing the long line of packed ice and snow on the boardwalk bordered by orange bacterial mats, all converging toward the Old Faithful Inn. This image was also photographed using a tripod. Actually, I carried the tripod on all my snowy explorations at Yellowstone because it served double duty as a walking stick. 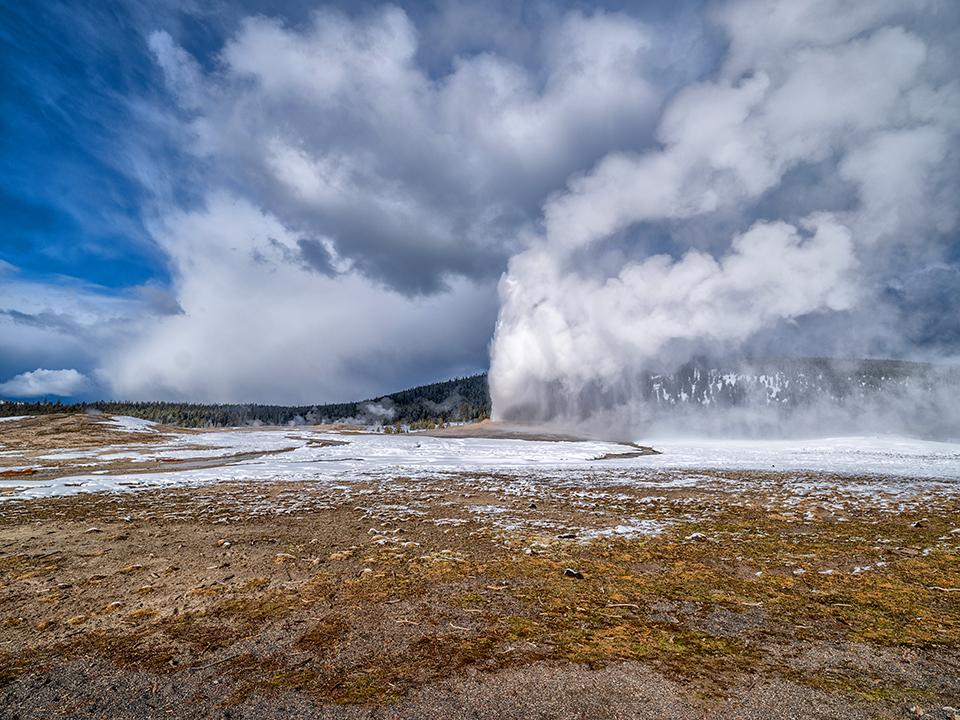 I never grew bored of watching Old Faithful erupt its powerful jet of hot water made even steamier in the cold winter atmosphere. I used a wide-angle lens to encompass the eruption, atmospheric clouds overhead, and massive misty steam veil floating away from the geyser. 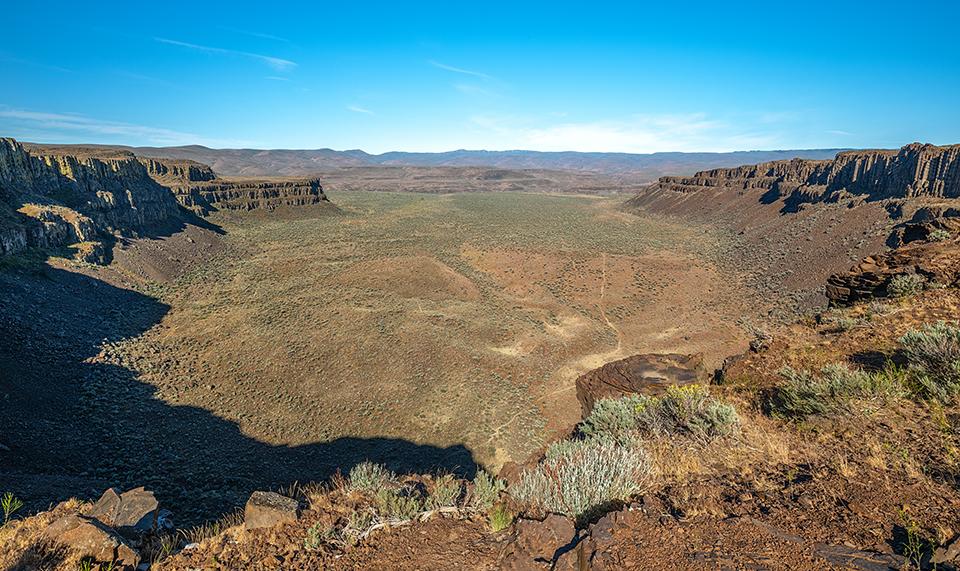 Frenchman Coulee is one of those deep, wide basalt channels carved by colossal Ice Age floodwaters surging 18,000 – 15,000 years ago through eastern Washington to create what we now call the Channeled Scablands. Easily accessible from Interstate 90 and very popular with the rock-climbing crowd, Frenchman Coulee is webbed with trails beckoning hikers to locations like the South Alcove overlooking Echo Basin. Gazing down upon the wide basin rimmed by tall columnar basalt walls – some of which resemble crinkled French fries – I tried to fathom the amount of water it must have taken to fashion such landscape. Originally, I was looking for a way to get to the top of those basalt columns but got lost, instead ending up at this spot to capture a wide-angle composition while listening to the wind and watching birds swoop across my field of view. 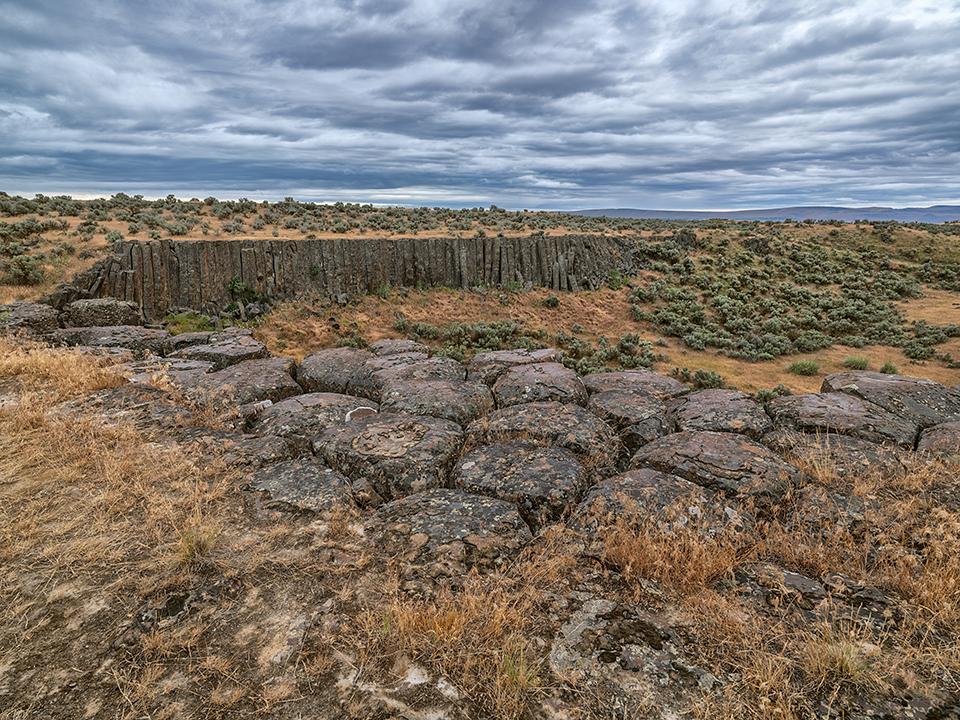 This photo recorded a singular achievement for me because it meant I’d found a route from the ground up to the top of this columnar basalt butte. From the moment I saw a video of geology students walking there, I knew I wanted to accomplish the same feat, with camera backpack and tripod in tow. This is one of those images replete with texture (the clouds and lichen-encrusted rocks) and pattern (the basalt columns) about which I often write. 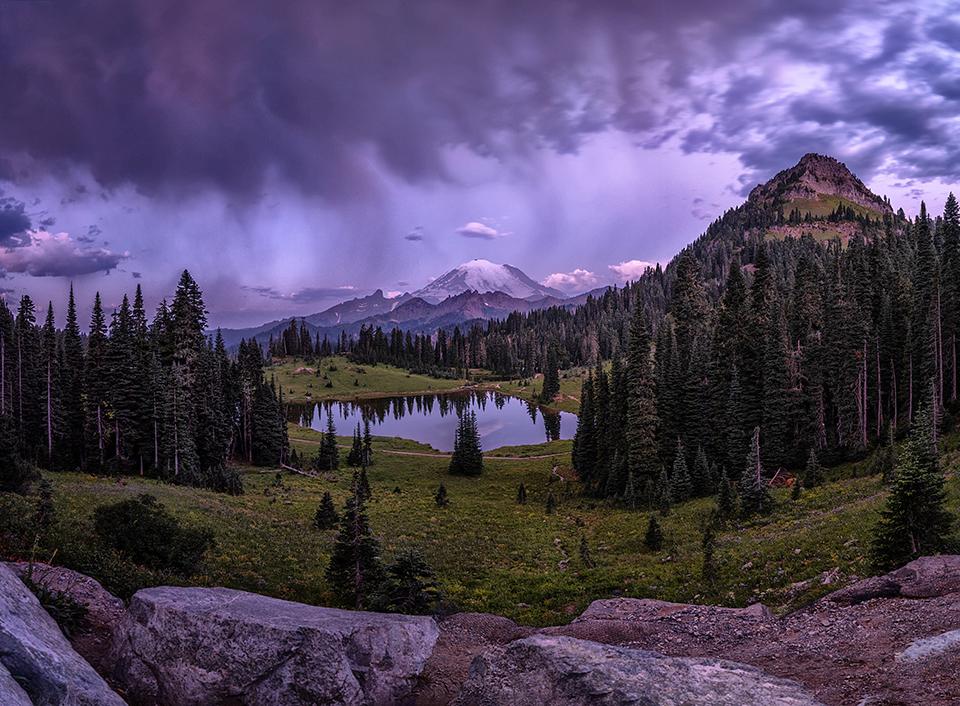 While capturing the park scenery with my smartphone for a subsequent article, I decided to attempt shooting several vertical shots to stitch into a single panorama. I’ve only tried this a few times before, each time with mixed results. But I gamely pulled out the medium format camera I’d toted along to repeat this photographic technique once again. The morning “blue hour” sky with its purple-shaded atmosphere and dark storm clouds shedding veils of rain provided a perfect moody atmosphere over “The Mountain” and lake. 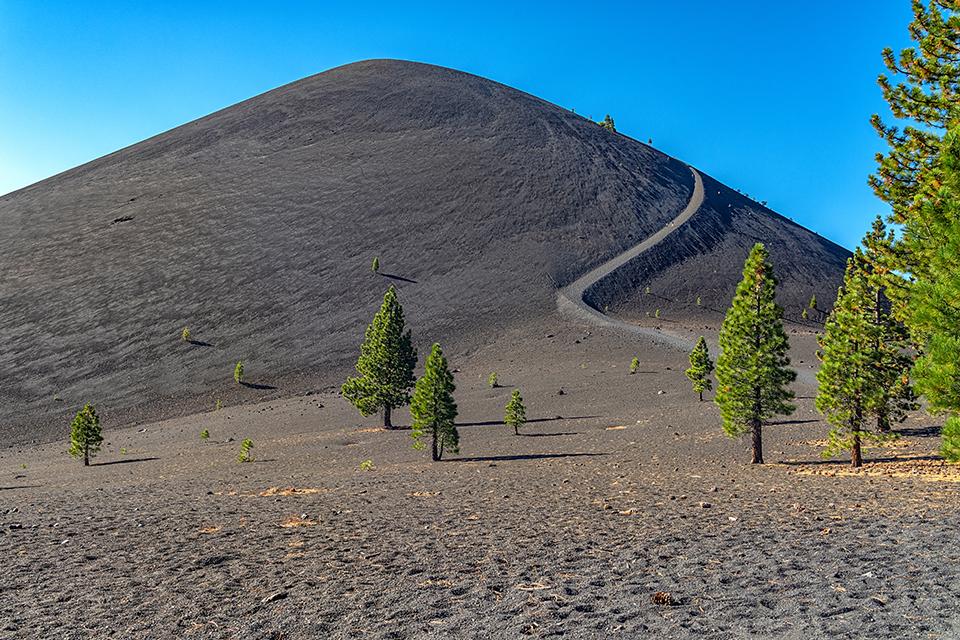 On this day, I crossed off several photographic bucket list items by hiking the Cinder Cone Trail. I’d seen images on Flickr of the well-defined trail curving up and around the volcano and promised myself I’d capture my own photos of this landscape, stark and sharp beneath a bright blue sky. You know how it is, don’t you, when you are approaching the trail’s end, you start to hike faster to get there? I did that, stopping now and then to capture closer and closer shots of this volcano located in the more remote northeastern part of the park. Of course, my trail’s end would not be done until I hiked that last 200 feet. 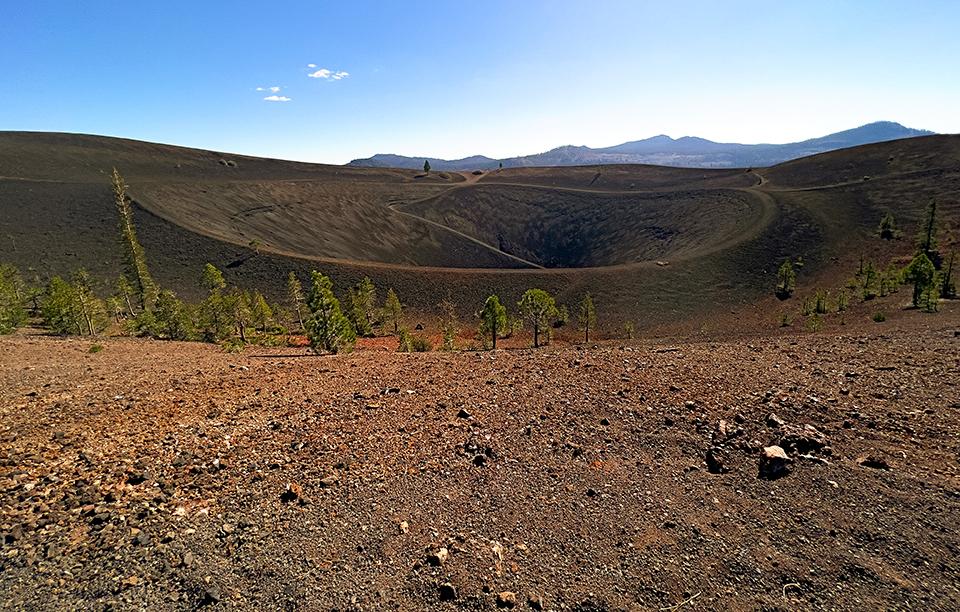 I’d loaded my camera backpack sparingly because I knew the climb to the top of Cinder Cone would be strenuous. This meant deciding to leave behind my widest-angle lens in the car. Upon reaching the volcano’s summit and wishing I’d packed that lens afterall, I whipped out my iPhone and captured a shot using its ultra-wide-angle lens. Smartphone technology is a wonderful thing, and smartphone cameras are not half bad. 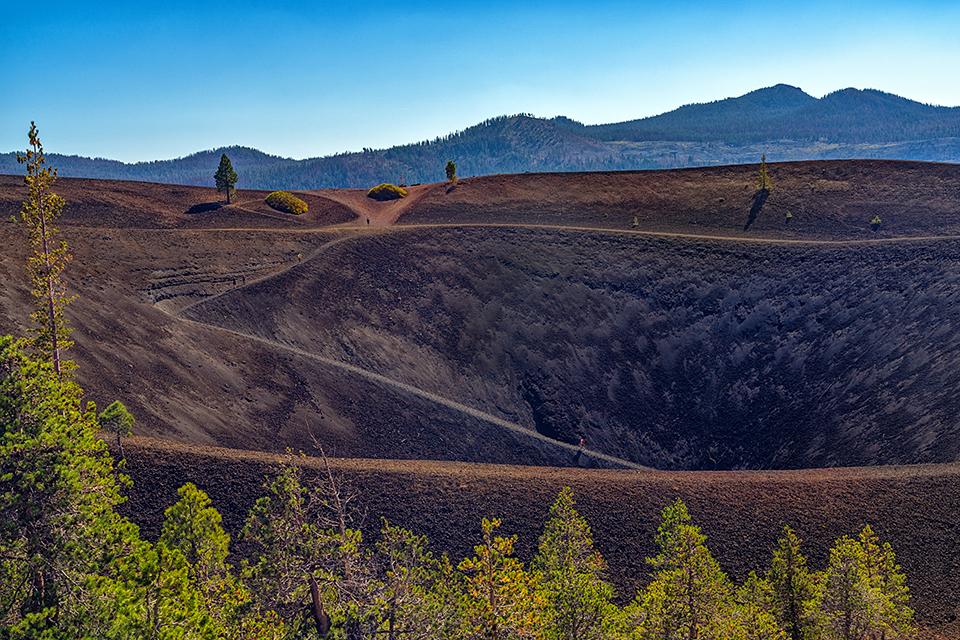 Still breathing heavily from the climb to the summit of Cinder Cone, I knew I did not want to hike down into the crater because then I’d have to hike back up over more ash and loose volcanic rock. I did, however, enjoy photographing other humans hiking up from the crater’s depths. I like including people in some landscape shots because they (or other manmade objects) are great for scale and reference. The people in this shot look tiny, don’t they? 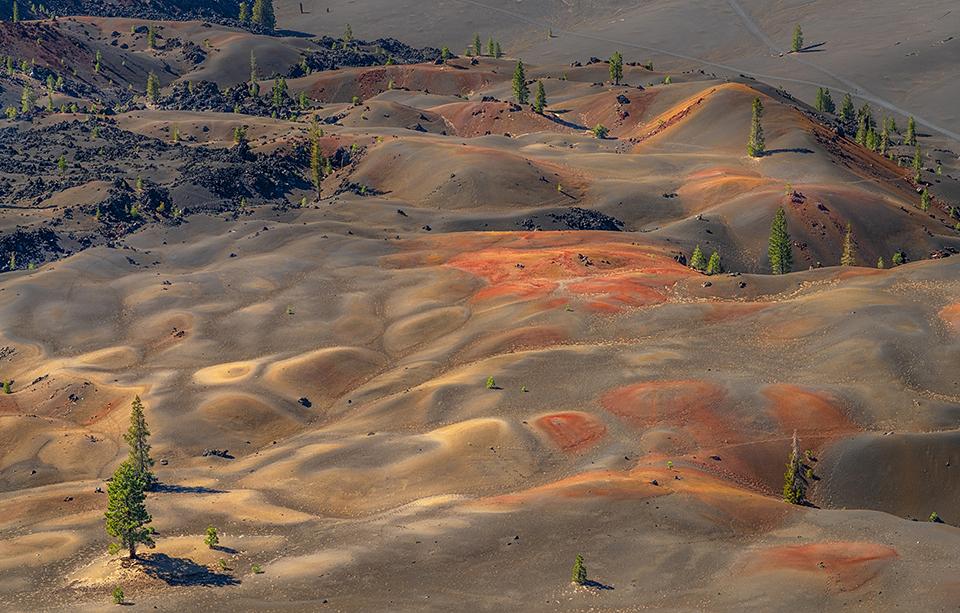 Many parks have a “painted” something-or-other. Petrified Forest National Park has a Painted Desert, and John Day Fossil Beds National Monument has the Painted Hills. Here, at Lassen, it’s the Painted Dunes. Those colorful autumnal shades of oxidized ash splashed across the beige and gray-brown rolling dunes are the main reason for my hiking the Cinder Cone Trail in the first place. Note the interesting ovoid patterns of the dunes. While I framed mainly for the colorful dunes, I did want to include a little bit of the Fantastic Lava Beds in the shot (upper left corner) to highlight the textural differences between the black, blocky lava and the smooth, colorful ash dunes.

There you go: my 10 favorite photos from 2022. Come this time next year, I hope to have 10 more favorites to show off to you from 2023. Like my own searches through Flickr, perhaps the images in this article will encourage you to capture your own photos of these same places.

The best new TV series on every streaming service

Tue Jan 24 , 2023
The streaming landscape is vast and hard to keep track of. TV shows pop up (and get canceled) seemingly overnight, and even if you’re in a place where you’re looking for a new show to sink hours into, it can be overwhelming to make the right choice. That’s what we’re […] 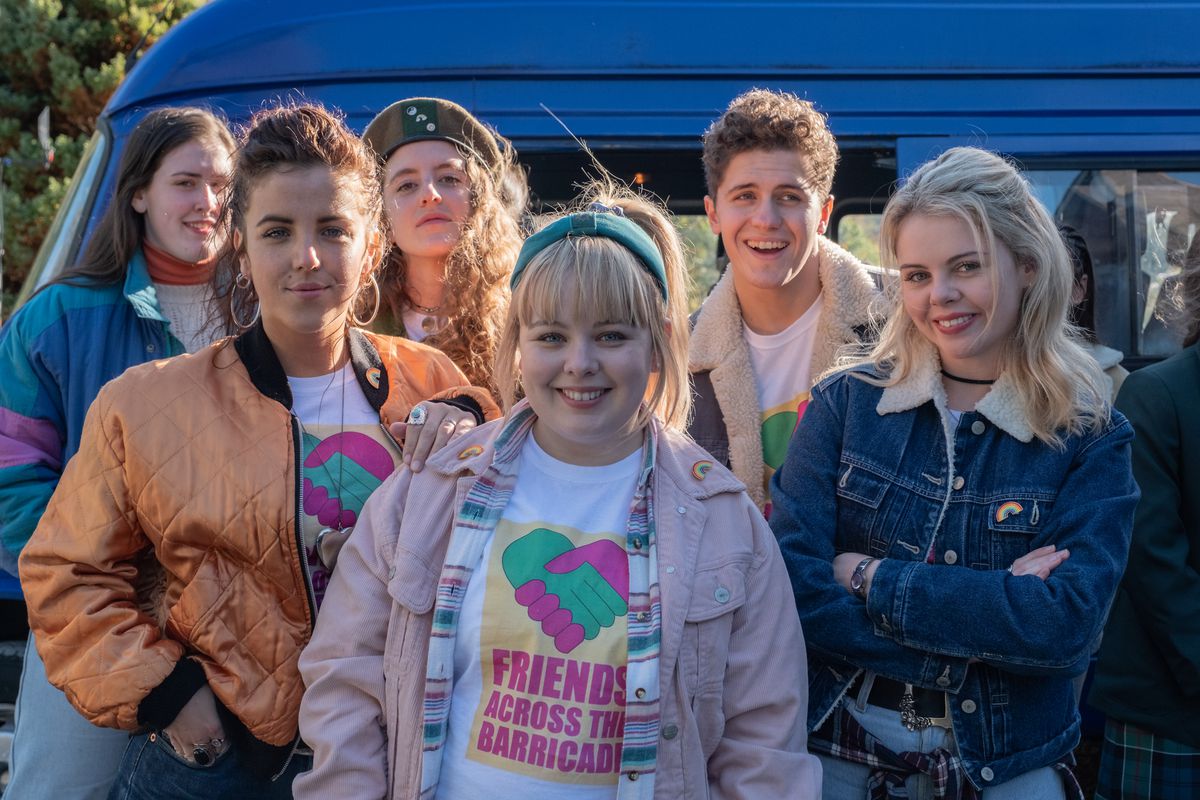