CLIMATE SCIENCE Space station carbon mapper faces demise An orbiting fridge-size sensor that uses lasers to map forest structure—key to understanding how much carbon trees sequester—is set to plummet to a fiery destruction in the atmosphere in 2023 unless NASA extends its tenure. Researchers and some U.S. Congress members are […]

An orbiting fridge-size sensor that uses lasers to map forest structure—key to understanding how much carbon trees sequester—is set to plummet to a fiery destruction in the atmosphere in 2023 unless NASA extends its tenure. Researchers and some U.S. Congress members are lobbying the agency to reconsider its plan to jettison the Global Ecosystem Dynamics Investigation (GEDI) instrument from the International Space Station to make way for a Department of Defense sensor. GEDI measures the height of trees and the quality of habitat they provide, information that its supporters say imaging satellites such as Landsat cannot provide. In operation since April 2019, GEDI has identified the parts of the Amazon rainforest that hold the most carbon, which could guide conservation efforts intended to minimize deforestation and the release of carbon to the atmosphere. GEDI’s value has been constrained by a lack of ground data from locations such as China and Indonesia, which are necessary to calibrate its readings.

A new antibiotic that represents an entirely novel chemical class has passed it first clinical test. The drug, gepotidacin, cured urinary tract infections (UTIs) so well in two large trials that researchers stopped them early. Its manufacturer, GSK, says it plans to seek approval of the drug from the U.S. Food and Drug Administration early next year; if it succeeds, gepotidacin will be the first new oral antibiotic for common UTIs in more than 20 years. Gepotidacin inhibits bacterial DNA replication by blocking two essential enzymes, gyrase and topoisomerase IV. This makes it effective against most strains of Escherichia coli, the primary culprit in UTIs, including those resistant to the fluoroquinolones, the current front-line antibiotics. Gepotidacin is also being investigated as a treatment for gonorrhea. Bacteria would likely need mutations in both targeted enzymes to dodge the drug, raising hopes that resistance won’t develop easily.

The damage is obvious. Those who are responsible should be very, very much aware of the need to compensate others.

McMurdo Station, the largest research outpost in Antarctica, is suffering from an unprecedented outbreak of COVID-19, with at least 64 active cases among its more than 900 residents, the U.S. National Science Foundation (NSF) said on 7 November. The agency this week paused most flights to the continent for 2 weeks and recommended that all residents wear KN-95 masks. This year, NSF relaxed its strict policies that had required researchers to isolate before traveling to Antarctica, but the agency’s vaccine mandate, which now requires a bivalent booster, remains in force. The outbreak will likely upset summer fieldwork, much of which relies on McMurdo as a logistical hub, further straining projects that the pandemic has already delayed by several years.

The world may soon have two new defenses against respiratory syncytial virus (RSV), a potentially fatal pathogen that has filled U.S. pediatric wards the past few weeks. On 1 November, Pfizer announced trial results showing its maternal RSV vaccine—which generates antibodies that are passed on to newborns—had nearly 82% efficacy against severe infection in the first 3 months of the baby’s life and almost 70% over the first 6 months. The company will now seek regulatory approval. Three days later, the European Commission greenlighted an RSV-targeting antibody called nirsevimab, developed by Sanofi and AstraZeneca, that can be directly injected into newborns. A similar antibody is already approved for infants at high risk of severe disease from RSV because of other conditions, but a phase 3 trial published this year suggests nirsevimab might help all babies. (See a Science interview about the discoveries at https://scim.ag/RSVvax.)

NASA said last week it will delay the launch of its Veritas mission to Venus by 3 years, to 2031, to allow the agency to improve project management after its Psyche spacecraft failed to meet its launch window this summer. Psyche, which will now launch in October 2023 to explore an unusual metallic asteroid, suffered from delays in the development and testing of its flight software at the Jet Propulsion Laboratory (JPL), NASA’s lead center for robotic exploration of the Solar System. An independent review commissioned by NASA found JPL has broader problems, such as technicians stretched across too many projects. Postponing Veritas, an orbiter that will map Venus’s surface in fine detail, will free up the staff needed to complete Psyche and two multibillion-dollar projects, the Europa Clipper and Mars sample return missions.

A 27-year-old man has died “while participating” in a novel gene-editing trial for his Duchenne muscular dystrophy, according to a foundation his family created to support the experimental treatment. The foundation, Cure Rare Disease, noted the death on 14 October but did not explicitly confirm that the patient, Terry Horgan, received the treatment. In a 1 November statement first reported by The Associated Press, it said its investigation of the cause of death would involve “multiple teams” and could take months. That has led many scientists to believe Horgan had indeed received a planned infusion of viruses carrying DNA that coded for a component of the gene editor CRISPR. The component was an enzyme called Cas9 that normally slices DNA but had been modified to switch on Horgan’s gene for dystrophin, a muscle protein. High doses of the same type of modified virus have previously been linked to severe immune reactions and one death in trials of a different therapy for Duchenne, in which the virus is used to carry a replacement gene. Horgan died about 6 weeks after the trial began at the University of Massachusetts Chan Medical School, according to ClinicalTrials.gov.

ITER, the international fusion test reactor under construction in southern France, is the biggest winner from an infusion of extra cash for the U.S. Department of Energy’s research, the agency’s Office of Science announced last week. ITER and 51 other projects already underway will split $1.55 billion from the Inflation Reduction Act, which President Joe Biden signed in August. The $256 million for ITER will be used to construct parts. Among the office’s 10 national laboratories, Oak Ridge is the biggest winner, receiving 32% of the $1.55 billion. The office’s total budget is $7.45 billion.

Frogs deemed extinct due to fungus live on

A new analysis reveals that over the past 2 decades, scientists have rediscovered one-third of the 87 species of harlequin frogs thought to have disappeared from South and Central America since the 1950s because of a lethal fungus. The work supports hopes that extinctions of the tiny, colorful frogs in the Atelopus genus, which comprises 105 known species, were not as widespread as feared. But some of the rediscoveries are based on a single sighting, and collectively the various species may be far from fully recovered, the researchers report this week in Biological Conservation. During the past 50 years, the chytrid fungus Batrachochytrium dendrobatidis has caused population declines in hundreds of amphibian species, researchers estimate, and harlequin frogs have been among the most severely affected. Understanding why the rediscovered ones survived may help inform conservation efforts. One take-home lesson, according to other researchers: Protecting habitats for all missing amphibians may help them make a comeback.

Multimillion-dollar Mercedes featured in Andy Warhol art up for auction

Fri Nov 18 , 2022
Most car enthusiasts will tell you that the classic Mercedes-Benz 300 SL “Gullwing” is a work of art. One of them literally became one. In 1986, German art gallery owner Hans Meyer got the idea to do a series celebrating the 100th anniversary of the automobile. The Benz Patent-Motorwagen that […] 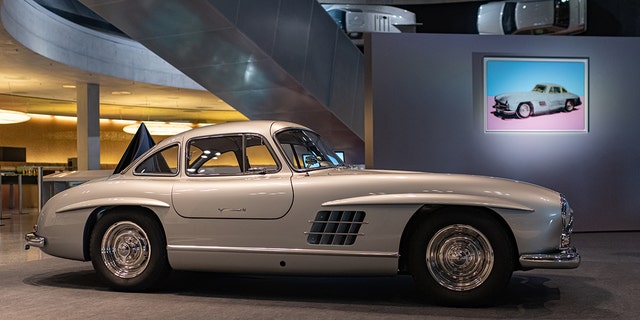