On Wednesday morning, hordes of collectors fell upon Paris’s Grand Palais Éphémère, the site of Art Basel’s latest franchise, Paris+. The “plus,” said director Clément Delépine during the press conference on Tuesday, stands for extra savoir faire and the “new things” the fair promises.

In practice, this meant eager crowds around the venue, which is itself a temporary replacement for the Grand Palais (which is undergoing a massive, years-long restoration). Collectors formed a bottleneck at the street entrances when the First Choice session opened at 10 a.m. The entrance at the other end, which leads to the smaller galleries’ booths, was less trafficked.

Inside, collectors swarmed. The VIP lounge instituted a “one in, one out” policy less than two hours after the doors opened. By the afternoon, the main building was sweltering from a lack of air conditioning, while the extension built specifically for the fair to house the smaller booths was freezing. The floor, made of large square planks, was springing like a gymnast’s mat by the end of the first day.

Galleries, even with their sizable contingents, could barely give anyone time—and though one told me to come back later, when it was quieter, others scoffed at that possibility. Granted, they came to play, with quite a few galleries doubling up on blue-chip artists: The work of Jenny Holzer, Olafur Eliasson, and Ed Ruscha, for example, appeared across a number of booths. While some gallerists grumbled about others bringing in the same works they showed at Frieze London the week before, it seems most are treating Paris+ with optimism.

The consensus among some gallerists before the event was that Paris+ may become more important within the larger Art Basel constellation, due to Paris’s position as a more attractive, continental city than staid Basel. Gallerists agreed that the fair has already been full-on, though many people were also coy, using “interesting” to describe it: No one’s willing to pass judgment quite yet.

But Artsy has passed judgment, at least, on 10 booths well worth a visit.

Annely Juda Fine Art’s elegant booth is filled with intriguing sculptural work, arranged in a roomy way. There’s nothing flashy or overcrowded here. Stepman (2020) by David Nash resembles a bronze stick figure at human scale and stands guard in the heart of the space; around the corner, Anthony Caro’s Table Piece CCCXLI (1976–77), a rusted artwork vaguely shaped like a fish skeleton, waits in surprise; and two of Tadashi Kawamata’s Shelf (2019) pieces contain small models that look to be mid-composition or destruction. Don’t skip over the walls, where delights such as David Hockney drawings await. Ranging far and wide across various media, including artists from many generations and geographical locations, the booth provides plenty to ponder.

Mariane Ibrahim’s booth is a haven amid the crowded, bustling, art-filled fair: The gallerist has entirely covered her space in black felt, which reaches up from the carpet and over the walls. There is a wall erected in the center, featuring Raphaël Barontini’s large-scale painting À la cour D’Henri Christophe (2020), which depicts Black figures dressed in the historical garb of the European aristocracy. On the other side, facing inward, hangs Clotilde Jiménez’s Bather (2020), a collage of a woman swimming topless; this private area is also where Ibrahim and her team meet with collectors.

Ibrahim’s mission to elevate artwork by people of color certainly resonated with fairgoers—all the works sold by the middle of opening day, with Peter Uka’s Skate (2022), a painting of rollerskating Black figures with ’80s hairstyles, going for $90,000.

With works by Jessy Razafimandimby

Another booth for those seeking oases of calm: Malagasy artist Jessy Razafimandimby created an entire multimedia series of works inspired by his past as a choir boy. Gallery director Marie Medec described the presentation as a “very spiritual space inside of the fair.” Les garnitures du Céleste ont chanté, je suis conquis (2022)—a sculpture in two parts, made of woven straw and pine wood—forms gates to the booth, while Si seulement les souvenirs parvenaient du future (2022), made of a bed sheet, other found objects, and pencil on paper, serves as a tabernacle.

Razafimandimby primarily uses found objects—sometimes spotted on the street—to question the concept of taste: As a child, he idolized the colonial objects of his home country of Madagascar, especially those in the domestic realm. But when he moved to Switzerland, they were considered tacky. Altogether, the booth meditates on the definition of both art and spirituality.

With works by Nile Koetting

Illuminated in shades of violet and pink, Nile Koetting’s sculptural works are all about impending doom. On one side of the multimedia piece Leap time table (2022), a screen counts down the time to the next four leap years. “We’re synchronized to fake time,” Koetting said. Leap years, of course, are an entirely human invention.

The other side offers a countdown to the year 2038—a reference to the “2038 problem,” which refers to the year when some computers will no longer be able to count any more seconds and will corrupt time (a similar issue occurred in Y2K). Untitled (bench) (2022), on which gallery director Hermine Murat was keeping various books, is inspired by museum benches and also stores emergency food.

Located in the corner, Corner for Upcoming Event (2022) is a cast-resin replica of the kind of triangular stool found in Japanese elevators. These stools are used by the elderly as places of rest—and can be dismantled to act as emergency toilets. Koetting has been producing theatrical and performative works, and in this move to more permanent sculpture, he seems to be veering into more collector-friendly forms.

With works by Marlon de Azambuja

The emerging galleries section at Paris+ is very strong. Instituto de Visión’s booth feels sunny, featuring bright yellow paint across its floor and the bottom half of its walls. Though the gallery is based in both Bogotá and New York, its focus for the fair is on Brazilian artist Marlon de Azambuja, who considers how architecture restrains both nature and humanity.

Posse #1 and Posse #2 (both 2019) are ceramic sculptures of birds that have been domesticated for their beauty. They sit on concrete floors with partial concrete walls around them, reminiscent of the austere buildings that have invaded the Brazilian landscape as restrictive, high-density housing becomes necessary for both the poor and the affluent middle class. “Modern architecture was a jail for people,” said the gallery’s artistic director Beatriz Lopez. “It forced them to all behave the same way.”

De Azambuja also looks at how everyday objects can be interpreted. Seis Luces (2020), a collection of 360 light bulbs (both concrete and real), considers whether the objects are defined by their function or their form. Can this be described as a chandelier?

Gagosian’s booth was so crowded that it was hard to see its design by French interior designer Pierre Yovanovitch. Barge in, and you’ll find a column in the middle, with a circular oculus cut out above, reflected in the carpet below. As the day wore on, the carpet pilled—something both the Gagosian staff and Yovanovitch himself weren’t expecting.

“It’s less hierarchical,” director Toby Kidd said about how the booth’s design gave equal importance to all the works, in all their varied positions. As always, Gagosian showed an eclectic selection: Of note is one of Christo’s first wrapped sculptures, Package on a Table (1961), which the artist made in his twenties.

Welcoming fairgoers who have been on their feet for hours, neugerreimschneider’s booth suggests that you rest a moment and lie down. Ai Weiwei’s giant Lego mosaic Sleeping Venus (After Giorgione) (2022) immediately catches your eye; People of the Earth (Pawel) (2018) by Pawel Althamer is a self-portrait of the artist reclining; and Thilo Heinzmann’s MM 01 (2019), which comprises three pieces of particle board, emotes lounging.

One of the outside walls displays Olafur Eliasson’s Exoplanet ecosystem (2019), made of 194 glass spheres whose colors change as you walk past—but are you watching them, or are they watching you? In today’s age of surveillance and productivity, and the idea of “quiet quitting” as a reaction against it, they evoke comedian Ali Wong’s famous line in her special Baby Cobra: “I don’t want to lean in, I want to lie down.”

Templon, which first brought American artists such as Donald Judd, Ed Ruscha, and Andy Warhol to Paris, has recently made moves across the Atlantic and opened a new gallery in New York. The booth flaunts its Americana, featuring a large oval painting by Kehinde Wiley entitled Christian Martyr Tarcisius (El Hadji Malick Gueye) (2022), which sold at the end of the opening day for $880,000.

While only one Michael Ray Charles painting is on view—a depiction of a three-handed Ku Klux Klan member called Forever Free (The Savior) (2006)—the gallery has already sold several of the artist’s works during the fair for prices between $140,000 and $200,000. Both Wiley and Charles have works on view at Paris museums currently.

While the presentation looks routine at first glance, the individual works have been magnets for collectors. “We have never seen such eagerness, such excitement,” said the gallery’s executive director Anne-Claudie Coric, regarding the new vigor since Art Basel took the time slot and venue of FIAC, Paris’s largest art fair before Paris+ arrived.

With works by Roméo Mivekannin

The Sherwood green walls of Galerie Cécile Fakhoury’s booth offer a verdant blip amid the white walls that surround it. Even more exciting are the paintings hanging from them: Roméo Mivekannin’s canvases aren’t stretched, though they’re sometimes sewn together.

Originally from the Côte d’Ivoire (like the gallery), and dividing his time between France and Benin, the artist takes inspiration from Oriental painting—he references the period in late-18th-century and early-19th-century Europe when colonialism spread across the globe. The figures are painted black, not just a very dark shade of brown, which brings to mind the February 2022 British Vogue cover, where Black models weren’t shot to lighten their skin tone. The paintings’ figures are dressed up in gowns and jewels, taking the positions of power that white people have historically occupied. Black excellence in raw form.

With works by Bertille Bak

The five screens that form the heart of Bertille Bak’s multimedia work Mineur Mineur (2022) weren’t working when the fair opened in the morning, but once they were up and running, collectors jumped at the chance to don pairs of headphones and watch the video installation. It shows children from five different countries playing as miners (the title of the work is a play on how the words “minor” and “miner” are the same in French).

Above the installation, the artist painted a rainbow on cardboard. It symbolizes the naïveté of youth and emphasizes the poverty of the represented countries: Bolivia, India, Indonesia, Madagascar, and Thailand. With all the wealth of the individuals wandering the fair, not to mention the prices of the works being bought, it’s hard not to consider this work long after moving on.

Thu Oct 27 , 2022
San Francisco Chronicle staff writer Tony Bravo puts on his mask as he embraces his role as a “rotting prisoner” in the cast of Terror Vault’s  “The Summoning.” Photo: Scott Strazzante / The Chronicle There’s something about the fall witching season that makes me want to let out my inner […] 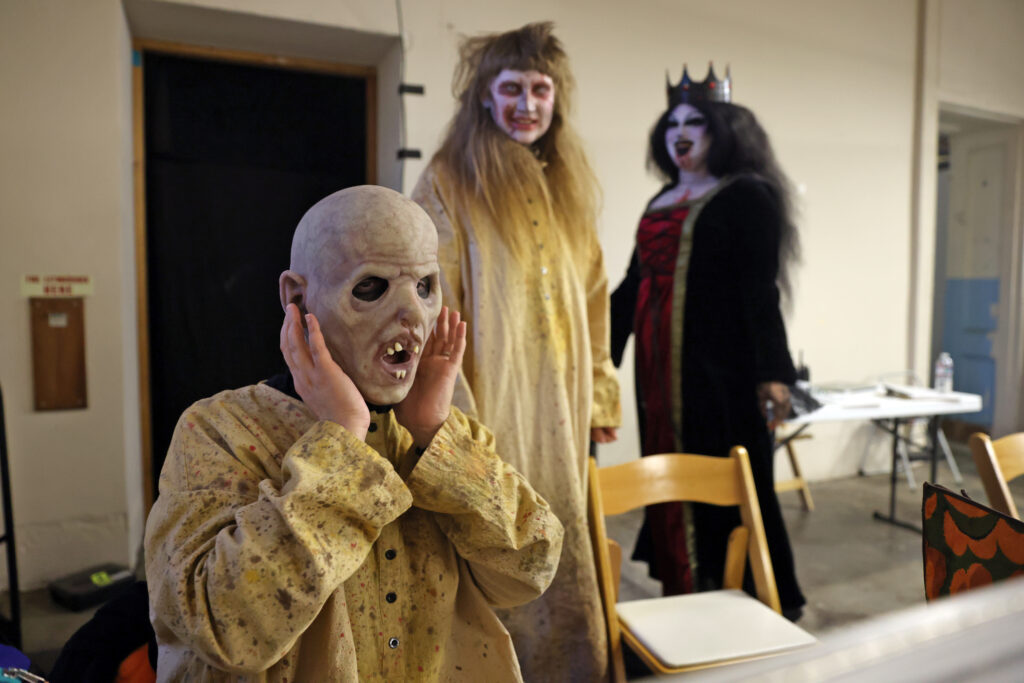