For the next few weeks, passersby in 14 US cities, many in states with curtailed or tenuous abortion access, will see clear, strikingly positive messages responding to the reproductive health crisis in the US. “Abortion is Healthcare,” says one billboard in Louisville, Kentucky, where the right to abortion is on […]

For the next few weeks, passersby in 14 US cities, many in states with curtailed or tenuous abortion access, will see clear, strikingly positive messages responding to the reproductive health crisis in the US.

“Abortion is Healthcare,” says one billboard in Louisville, Kentucky, where the right to abortion is on the ballot this week, around two pink stethoscope cords in the shape of a uterus. In New Orleans, a sign blares “THANK GOD FOR ABORTION” in stark black and white, an angel flying off the top right corner. In Atlanta, site of two of the most closely watched midterm races this year, a background of lush green leaves underscores blooming text composed of tropical flowers: “ABORTION IS LIFE.”

The billboards, 19 in total, form the exhibition Vote for Abortion Rights, curated by the Swedish American conceptual artist Michele Pred and the Brooklyn-based non-profit SaveArtSpace. The installation from 10 different artists, including Pred, encourages viewers to channel their fury, apathy, despair or confusion over the erosion of reproductive health access in the US at the ballot box this month.

Pred conceived of the project in May, when a leaked draft opinion all but confirmed that the supreme court would overturn a woman’s right to an abortion guaranteed for 50 years by Roe v Wade, as it did in late June. The conservative majority’s 6-3 vote in Dobbs vs Jackson Women’s Health Organization relegated reproductive choice to state governments, some of which immediately outlawed any abortions.

Since June, trigger bans or hastily passed restrictions have outlawed abortion in 18 states; five more states have put abortion on the ballot for the midterm elections this week.

Roadside advertisements are often a tool of conservative messaging – arguably the most famous billboard in my home state of Ohio, where fundamentalist Christian signs dot the interstates and abortion access hangs by a court injunction, simply says: HELL IS REAL. Pred recognized the common billboard as “an incredible form of public art that spread to a very large audience”, she told the Guardian. “And, I think, a very important audience: people who don’t go to museums or galleries, which is the majority of the population.”

Whether on a freeway or in a neighborhood, billboards are “really one of the most democratic forms of artwork, because everyone gets exposed to them,” she said. The goal of the project, which took submissions from over 400 artists, was to get the message physically in states where conservative voting blocs or minority rule governments threaten abortion access, including Arizona, Texas, Louisiana, Wisconsin, Georgia, Nevada, Tennessee and Kentucky. Participating artists include Bud Snow, Holly Ballard Martz, Laney Baby, Lena Wolf and Hope Meng, Shireen Liane, Viva Ruiz, Wildcat Ebony Brown and Yvette Molina. Pred, whose project curation dovetails with her recent show Equality of Rights in New York, also has an installation – a picture of a purse emblazoned with the year 1973, when Roe was decided – hanging until 13 November above Manhattan’s West Side Highway, at West 46th Street and 12th Avenue.

Though Pred has installed art explicitly concerned with reproductive justice in New York or near her home base of Oakland, California, she was wary of “preaching to the choir”, she said. “I made a commitment to do more work in these other states, where it’s most important. Where it’s essential, actually – maybe it could change minds or inspire people or provoke people to think in a different way.”

As such, Pred intentionally chose artists whose designs were not “violent or angry or bloody” – “if it’s going to be a bloody coat hanger, that’s not going to change anyone’s minds in those states,” she said, referring to iconography based in fear of returning to a pre-Roe era of dangerous backroom or self-administered abortions. “That’s not inspiring anyone, that’s not changing any minds.” Such imagery, however emotionally accurate, mirror “the negative images that they are presenting to us” – misleading anti-abortion images of bloody fetuses or hellish condemnation, found along many a highway in the US.

The designs in Vote For Abortion Rights present a positive reframing rather than a pro-choice campaign attack ad – abortion as healthcare, as freedom, as life. Thank God for abortion, says Viva Ruíz’s New Orleans billboard, which shares the tagline of her activism work. “Talk about flipping a script, right?” said Pred. “That’s the way to maybe inspire some people to think differently. I wanted to put billboards out that are hopefully thought-provoking in a positive way to people who might be voting against abortion.”

Not all billboard operators, a combination of national chains and local businesses, were receptive to the messages. London-based artist Shireen Liane hoped her design, “abortion is healthcare” in green text over an American flag, would be mounted around Phoenix, Arizona, where she had previously accessed two abortions. But the design was only approved by a company in Las Vegas. “The billboard companies were usually conservative, and we went into this knowing that,” said Pred, acknowledging the lack of control in determining location for each installation. “The goal was to get them up as much as possible, all over the country.”

Whether catching a motorist’s eye or reminding someone committed to reproductive rights to get to the polls for the midterms, Pred said she was hopeful the nationwide project will keep up crucial momentum against entrenched anti-abortion lawmakers, and the likelihood that things will get worse before they get better. “I’m extremely worried there’s still not enough women who are going to go vote, not enough people who are going to go vote,” she said. “This is a state of emergency for abortion rights right now.”

Wed Nov 9 , 2022
There’ll be more to do than just shopping at the new Animate flagship location. It’s been a rough couple of years for Tokyo’s otaku-oriented businesses, with landmark dojinshi shops and video game arcades closing down. But there’s a happy exception coming soon, as Animate, Japan’s biggest anime/manga specialty store, is […] 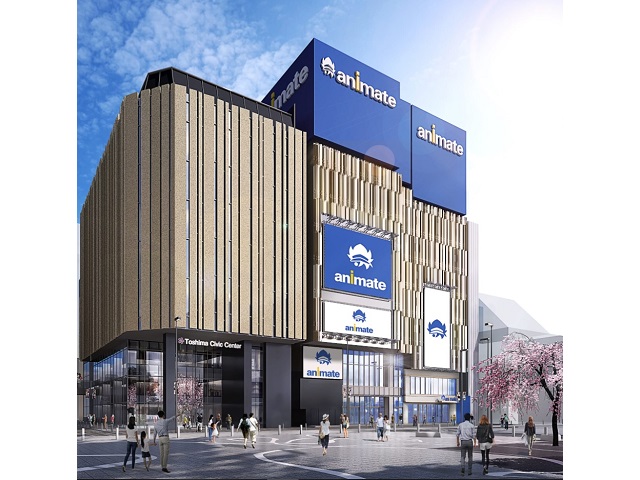