Robert Reeder of Maryland was charged in February with four misdemeanors. He pleaded guilty to unlawfully demonstrating inside the Capitol and was set to be sentenced on Wednesday afternoon, with prosecutors asking for two months in jail, partially due to his lack of remorse. But on Wednesday morning, the online […]

Robert Reeder of Maryland was charged in February with four misdemeanors. He pleaded guilty to unlawfully demonstrating inside the Capitol and was set to be sentenced on Wednesday afternoon, with prosecutors asking for two months in jail, partially due to his lack of remorse.

But on Wednesday morning, the online group known as the Sedition Hunters tweeted newly discovered clips and photos, apparently showing Reeder fighting with police on January 6. Sedition Hunters is one of several online collectives, many comprised of anti-Donald Trump activists, who have combed through footage from the Capitol attack to identify rioters. The Justice Department has cited their work in many cases.

Prosecutors said during the truncated hearing that they notified the judge, as well as Reeder’s defense attorneys, about the new footage on Wednesday morning. Prosecutors planned to go forward with sentencing and request the maximum six-month jail term, but after reviewing more of the videos, they asked to delay the hearing. He is now scheduled to be sentenced on October 8.

US District Judge Thomas Hogan said he was “concerned” about the new videos because Reeder was previously portrayed as “more as an observer than a participant” in the violence. Reeder’s attorney in court said that “on first blush, the clip is problematic” but said there might be other footage that could help his defense arguments. Reeder is seeking a sentence of probation.

“The @SedtitionHunters team are extremely grateful for all the challenging work the FBI and the DOJ are putting into each individual case and their willingness to accept the assistance from our community of researchers,” the group told CNN in a statement. “The quick response to last minute discovery of images showing a suspected assault clearly shows the dedication by all involved.”

A Justice Department spokesman declined to comment about the case or the new video.

The plea deal prosecutors signed with Reeder gives the Justice Department a path to charge him with the alleged assault, if it chooses to. It says, “the United States expressly reserves its right to prosecute your client for any crime of violence … if in fact your client committed or commits such a crime of violence prior to or after the execution of this Agreement.”
Reeder is one of the rioters who pleaded guilty but remains defiant about key aspects of the January 6 insurrection. These cases are being watched closely as more rioters learn their punishment for participating in a grave attack on American democracy, and the Justice Department has said it’ll seek harsher sentences for unrepentant defendants.

Reeder argued in court filings that he should get probation because he only went in the Capitol to find water after getting pepper sprayed and faulted police for ineffectively guarding the building. He claimed he stayed inside — even while alarms blared, and police officers squared off with violent rioters — because he “was struck by the awe and the beauty of the Rotunda.”

Prosecutors cited Reeder’s apparent lack of remorse as one reason why he should be sentenced to two months in jail. That is a stiffer punishment than most of the other rioters who pleaded guilty to the same misdemeanor. In similar cases involving nonviolent rioters, the Justice Department has asked for house arrest or probation, but never any jail time.

Reeder offered “a self-serving rewrite of history that sought to portray himself as a hapless tourist, absolve himself of any wrongdoing (and) place blame on others,” prosecutors wrote their recommendation, where they slammed him for criticizing the police response on January 6.

They also rebuked Reeder for claiming in an April FBI interview that the riot was “a plan to allow people in” so the media could “demonize the Trump people” — a conspiracy theory that 55% of Republicans believe is true, according to a Reuters/Ipsos poll that was conducted in April.

In recent court filings, Reeder said he is a registered Democrat who “did not care much for President Trump.” But on social media, he was a member of multiple pro-Trump groups on Facebook, wrote that a “civil war is coming,” posted memes about the voter-fraud myth, and even submitted an online request to the Supreme Court for an investigation into the election.

More than seven months after the attack, prosecutors have secured guilty pleas from 37 of the roughly 575 people facing criminal charges. Seven defendants were already sentenced, and they received punishments ranging from probation to house arrest to eight months in prison.
Next Post

Is it raining again in the British Museum’s Parthenon gallery?

Fri Aug 20 , 2021
This article was updated on 13 August to include a statement from Greece’s culture minister Left: We took this picture of the stained roof in the Parthenon sculptures gallery in January 2020. Right: Figures from the pediment of the ancient temple in the British Museum © The Art Newspaper Water […] 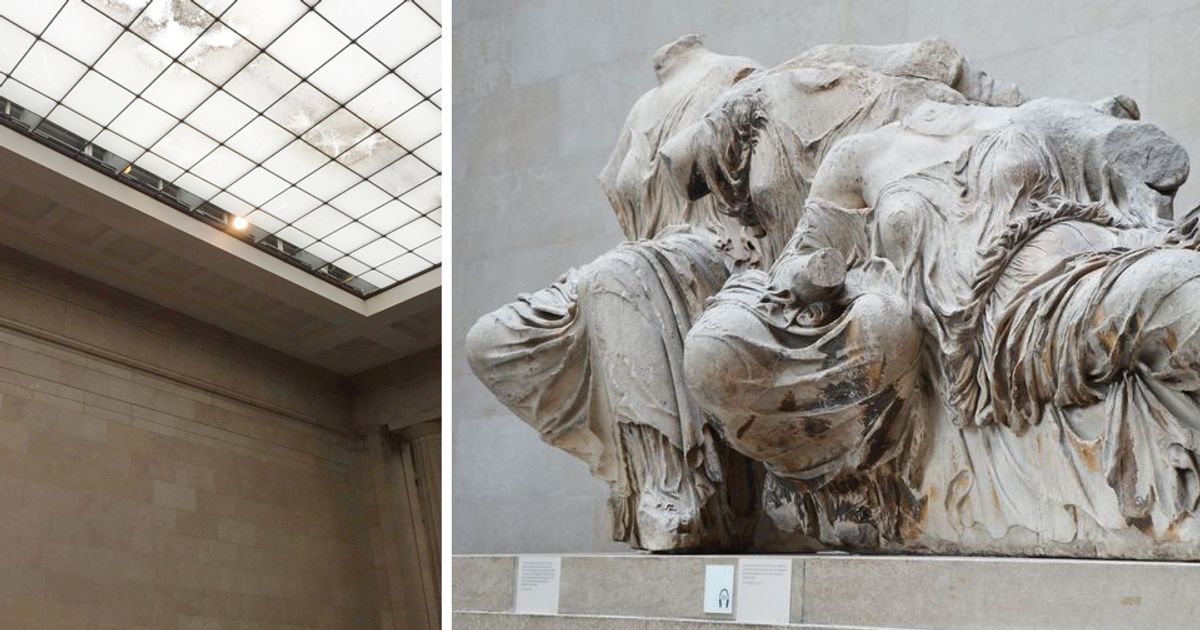