I’ve been incredibly impressed with iPhone footage since the iPhone 12 Pro landed in my hands a few years ago, but the iPhone 14 Pro has taken things to the next level. The iPhone 14 Pro’s new camera system is the most versatile Apple has offered in years, and as […]

I’ve been incredibly impressed with iPhone footage since the iPhone 12 Pro landed in my hands a few years ago, but the iPhone 14 Pro has taken things to the next level.

The iPhone 14 Pro’s new camera system is the most versatile Apple has offered in years, and as a video maker, it’s become an invaluable tool. Small features like an excellent microphone and autofocus on the front-facing camera have bumped up what you can do with this shooter, turning it into an all-in-one production tool.

Video is the next mountain to climb

I’ve been putting the iPhone 14 Pro through the gauntlet over the past five weeks, and on a recent day trip to New York, I decided to see if I could go full #ShotOniPhone. The answer was, of course, yes. As expected, the iPhone 14 Pro’s cameras, HDR and zoom functionality all worked nearly flawlessly. Amusingly, the most problematic shots were trying to film my iPhone 14 Pro without having another iPhone 14 Pro to do B-roll with until I got back to the MobileSyrup office in Toronto.

However, little things like the autofocus on the front-facing camera this year and a smooth transition between the lenses when shooting make this camera much more practical than last year’s 13 Pro. Even the microphone surprised me with how clearly it was able to pick me up as I walked through downtown Manhattan. To be fair, I was holding the phone maybe a hair too close since I was trying to favour the microphone, but I can safely say that next time, I can frame myself up nicely and trust that the mic will work.

The last thing that impressed me was the 3x zoom (77mm equivalent) capabilities. Sure last year’s iPhone 13 Pro could reach the same distance, but the stabilization and clarity of the telephoto zoom this year seem to be better to me. A few times during the Brooklyn Bridge aspect of the video, I even cropped in on 3x footage to 200 percent digital zoom. It looks a little grainier, but the fact that it works says something about how far the 3x lens has come. It’s still not as good as the S22 Ultra’s 10x lens, but it’s a fun focal length.

The 2x zoom is also nice this year. Offering a shorter 50mm equivalent, I found myself using it more for photos than videos, but there’s no denying that it helps frame up cinematic shots a little more than the 24mm width of the primary lens. 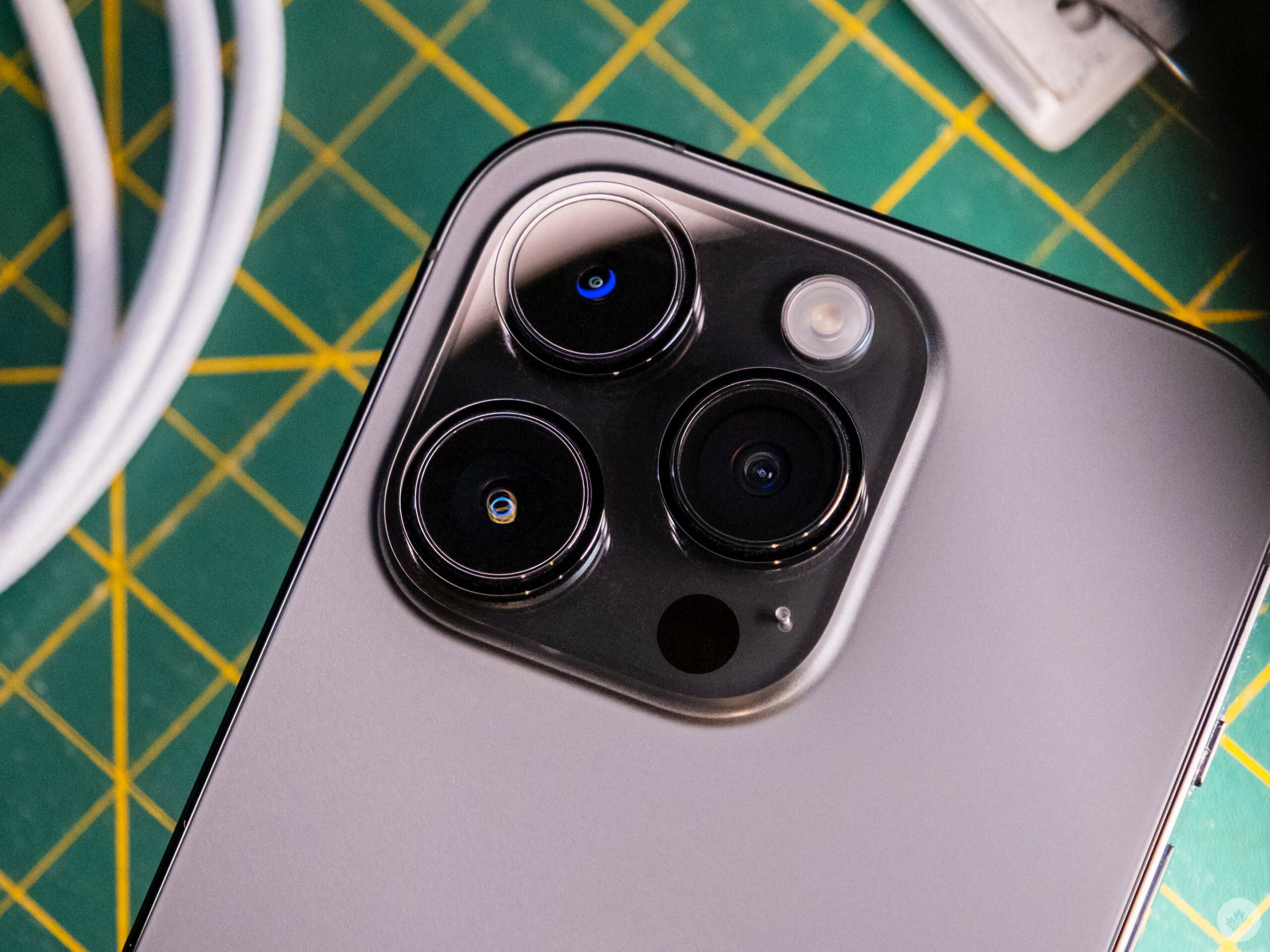 That’s not to say that every aspect was an outstanding success. During the opening on-camera sequence, I’m riding my bike at 6am, and the stabilization is too jerky to be called a good shot. In good light, the stabilization is top-notch, but in low light, things get harder to lock onto. This issue affects all cameras pretty similarly, especially tiny phone cameras. On the flip side, the iPhone camera can be commended for being able to see when it’s that dark out and for me to be able to use it while biking.

It’s not perfect, but you can get the shot where other cameras might fail.

The only other issue I encountered was that the Macro mode was a little more aggressive this year and often turned on when not needed. On the plane, the window kept triggering it, and around my home, it seemed to come on any time I was around 15cm away from an object. This doesn’t matter if you’re taking pictures of receipts for expense forms, but when I’m taking photos, the main lens is still sharper and provides a more uniform image.

The ability to strap an iPhone anywhere is hard to beat.

Overall the cameras seemed a bit less sure of themselves this year. The image would shift around as the camera analyzed the scene and chose the best lens for the job. Most of the time, I’d still be able to get a great shot, but sometimes it would take the camera longer to compose than I was used to. It would never be an outstanding amount of time, but something I hope can be addressed in future updates. 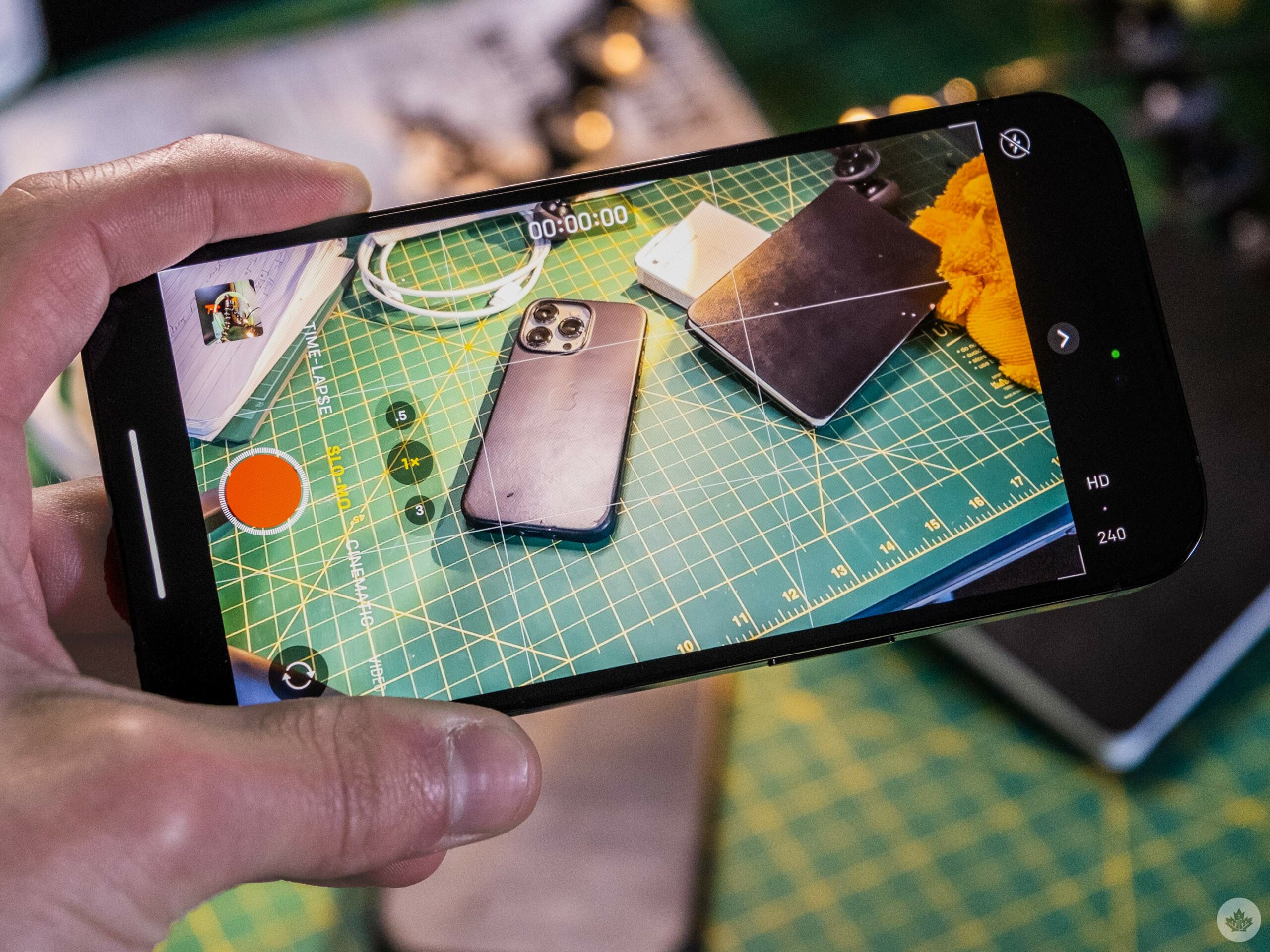 Beyond being a commendable camera due to its lenses and advanced computational photography techniques, the iPhone is also loaded with a few cool cinematic tricks and one handy feature that gives it a leg up on the competition.

The most important of these features is the Cinematic Mode. This camera technique launched on the iPhone 13 series, but it’s considerably improved on the iPhone  14 series. Now that it works in 4K, it’s much more useful. It still can’t replicate a big lens in every situation, but with its (fake) variable aperture controls, it’s pretty easy to dial in a nice-looking image on just about anyone. And the fact that you can adjust focus in post can help. I used this feature a lot for quick talking-to-camera moments on the iPhone 13 Pro, and I expect to utilize it more this year now that the selfie camera also has autofocus. 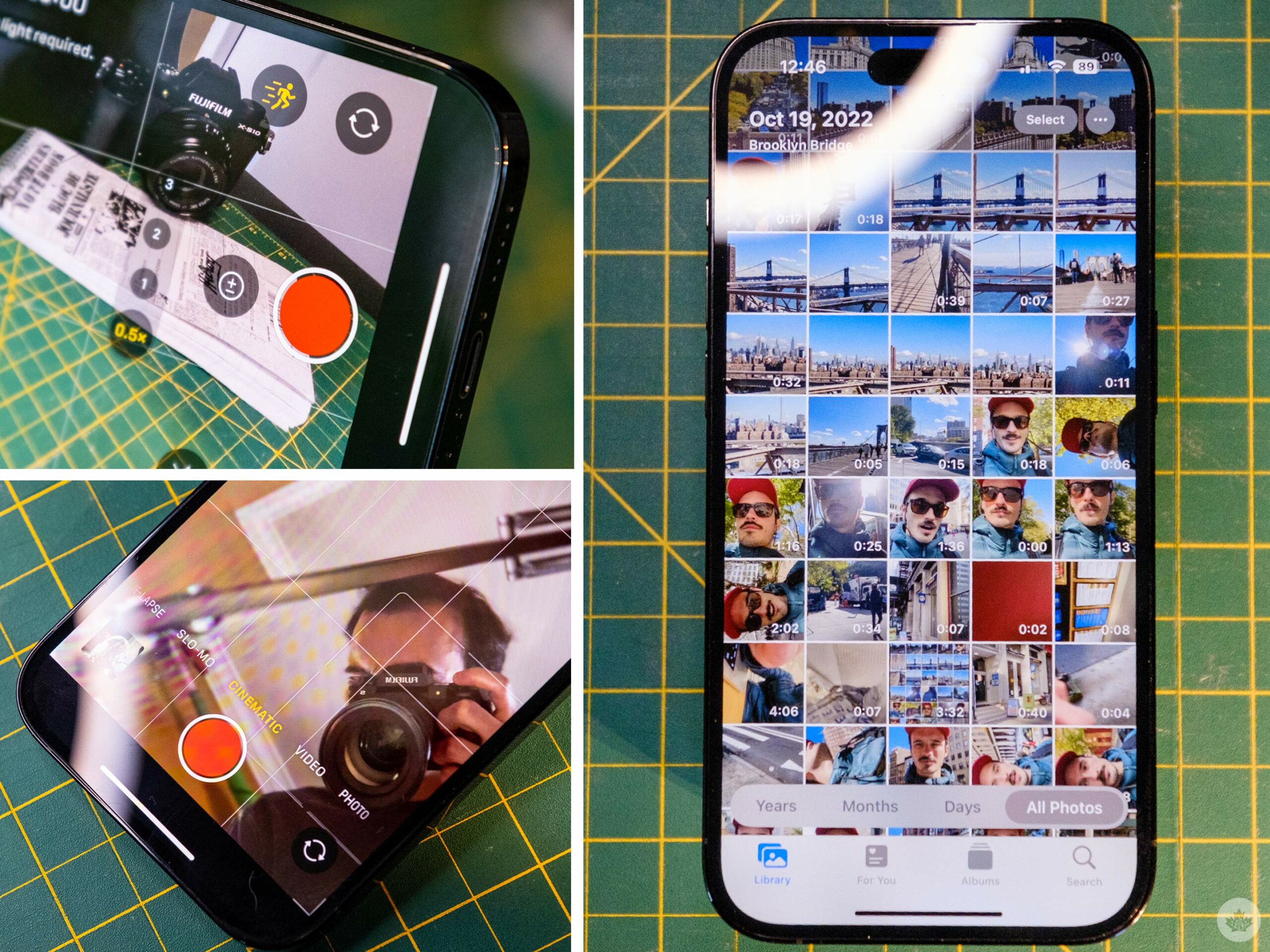 The newest camera perk is Action Mode, which turns your iPhone into a GoPro. It does crop the sensor down to 2.8k, but the stabilization is impressive and gives your footage a gimbal-like quality. It even works on the 3x lens when you have enough light, which does spark some ideas for B-roll in the future. Action Mode is still a little limited this year, but it’s a convenient tool to have packed into the iPhone for adventurous shooting situations or that one crazy shot you want to get for an online short film.

ProRes support is the other perk I don’t use much. It allows for a tiny bit more colour flexibility, but it also takes up a ton of storage. Hence, it’s not something I’d recommend for anyone other than if you needed to get one iPhone shot for a pro shoot and wanted the best chance at making it uniform. For people like me who run a YouTube channel, I’d expect the standard video files to be more than enough.

The final draw of the iPhone camera for me is AirDrop. It sounds like a small thing, but being able to send files efficiently to my MacBook so I can edit them is genuinely a time-saving feature that I never want to give up.

Does this replace a mirrorless camera yet? 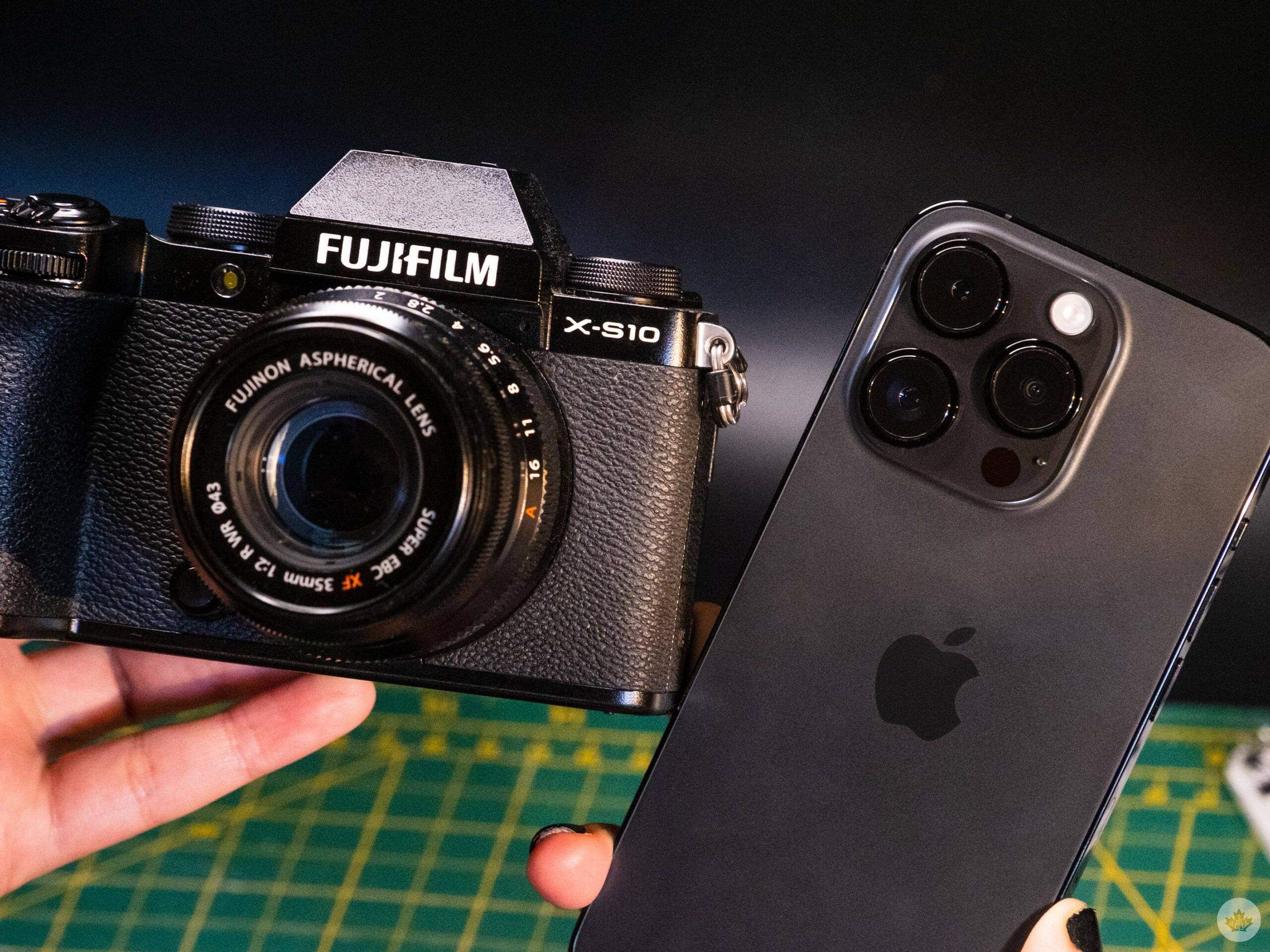 When it boils down to it, I think the iPhone 14 Pro can replace a real camera as long you use its main lens or vlog with the selfie camera. This is all within reason, of course. In low-light situations, a mirrorless camera will hold up much better and provide a more compelling depth of field in conditions where the focus isn’t set to infinity. However, for shooting wide landscape shots or vlogging, the iPhone is so handy it’s hard to compare.

Often when I’m shooting car videos or vlogs, I need to leave my camera on a tripod on the side of a road or leaning on a building to get a shot of me walking or driving past. For moments like that, the ease of setup and the small size that I can somewhat hide are huge bonuses compared to the bulky mirrorless system. A real camera will produce a marginally better shot, but the setup time isn’t worth it in many instances.

Still, I just can’t call the iPhone 14 Pro my favourite camera yet. It’s probably my most used camera, but next to my Fuji systems, it’s still hard not to set up the big camera when I want to shoot some crisp footage with nice bokeh and total control over a shot.

However, as Cinematic mode, the iPhone’s low-light capabilities and zoom lenses get better yearly, it might only be a matter of time before a phone’s computational power rivals a dedicated camera system.

5 things you have to watch on TV this weekend

Sun Oct 30 , 2022
Michael Imperioli in The White Lotus; Big Mouth Welcome to the weekend edition of What’s On. Here are the big things happening on TV from Friday, October 28, to Sunday, October 30. All times are Eastern. [Note: The weekly What’s On will publish on Sundays.] 1. The White Lotus brings […] 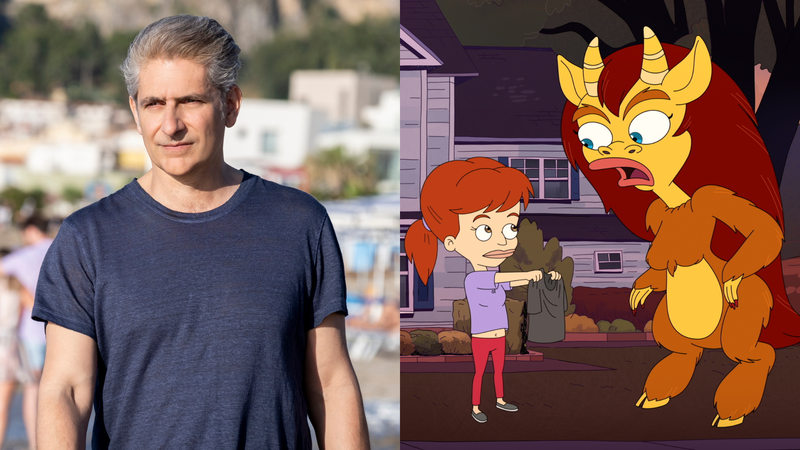